Have you ever been in a car full of sobbing girls? Well, I have and it was no fun because one of them should have been me but it is hard to drive and cry at the same time so I had to try to hold it together. You have probably guessed already that Husband left for Afghanistan today. Nobody wanted him to leave and it was a very, very emotional good-bye. So to make ourselves feel better, we went shoe shopping and to Outback Steakhouse for dinner, having learned last time that clothes shopping doesn't make you feel better if what you buy is too small (stupid British designers!) Three of us got new shoes and one of us got neon socks that she apparently has been dying for. I didn't know neon socks were a necessity, but if you only ever wear Converse or Vans, then I guess neon socks are a must.

Now it is homework time and the whining has begun. I hate homework. Sometimes, I think teachers assign it just to torture me, the parent. What did I ever do to 5th grade teachers that they assign so much homework that I can never get anything done? At the school in China that we hated and switched our kids out of, they seriously thought 4 hours of homework a night was appropriate and I so hated that school. Also, their spelling books were from Australia even though it was the "American" school and it had questions about Aussie prime ministers, like who was the PM in 1972 as if your average American 5th grader would know and it's a good thing Wikipedia wasn't blocked in China back then or Child 1 would have failed spelling.

Speaking of spelling, this girl in Iceland is having a worse day than me. The girl is on the left. Her mother is on the right. Must be Icelandic genetics because they do look like sisters. 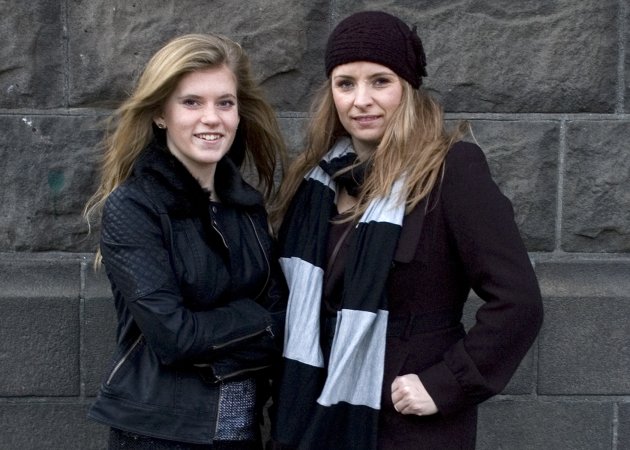 I know. You are thinking that she is beautiful and her father is not in Afghanistan, so how can her day be that bad? But that is because you do not know that when a child is born in Iceland, her name must be from an approved list provided by the government. Her mother named her after a character in an Icelandic novel by a Nobel Prize winning author. And the character in the book was female, but the government has decided that her name "Blaer" is a boy's name so legally she can't use it but since the Priest OK'd it and put it on her christening certificate, she is legally nameless. Sometimes I wish our government would tell people they can't name their babies things like "Hashtag" or "Latrine" but I supposed that would be Unamerican. But Blaer is a lovely name and the Icelandic government should be ashamed of themselves. So thank you Blaer, for reminding me that even if my husband is in Afghanistan and I'm still sick all the time, at least I have a name.
Posted by Jen at 8:07 PM