Bad Day 190--Cool is not a synonym for disgusting

Tonight it is cold and rainy and Child 2 has a cold, so it's the perfect night for homemade chicken noodle soup. However, noodles have wheat in them, so I made avgolemono instead. For those of you who don't know what that is, it's a creamy, lemony chicken soup with rice that uses eggs instead of flour to thicken it. It looks like this. Yummy, no? 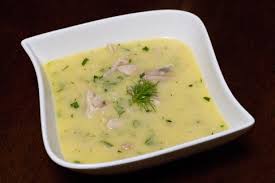 I thought it was delicious and very reminiscent of Thom Kha Gai which is one of my favorite things to eat but made me sick the last time I had it because I think the restaurant used soy sauce in it. But this was completely gluten free and warm and filling and the children hated it. Child 2 said it was cool which is her code for almost inedible but I'm too polite not to eat it. Child 3 said that it tasted foreign but she just gulped it down fast so she couldn't taste the lemon. I think she thought that was a compliment. And Child 1 said maybe if I put in more onions, it might overwhelm the lemon so you couldn't taste it. I should mention that Child 1 hates onions and picks them out of everything. So that wasn't a compliment either. I told them they'd get used to it because I was going to make it again. Husband will love it and I miss chicken noodle soup and this was yummy. It defies explanation that children who like eggplant and mushrooms and olives are picky eaters!

Oh well, tomorrow it's supposed to snow in the afternoon/evening, so I'll make a different kind of soup and they probably won't like that either. I'm not sure why I try anymore. Maybe it's time to re-introduce "children are in charge of dinner week." I'll take a whole week off and one of them will be in charge every night. Then they'll see how easy it is to find gluten-free food that is quick and simple and delicious and nobody complains about. Or maybe we'll all be starving because nobody will actually cook anything and they will all just eat ramen and say to me oh I forgot I was supposed to cook. That latter thing is more likely.

The owners of this house in Sweden are having a worse day than me. See if you can guess why. 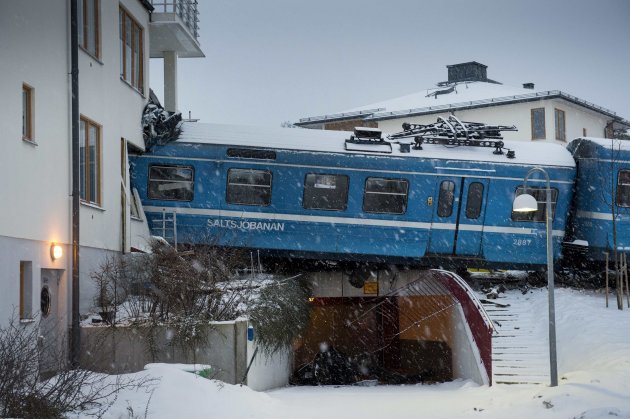 Yes, that's a train in their second floor. Apparently, a train company cleaning lady stole a train and drove it at high speed off the end of the tracks and into the house. Luckily, nobody but the cleaning lady was injured. However, I don't even want to know how the phone call to their insurance company went about how a train was in their family room. (I'm sorry. Did you say a train? In your living room? I don't think your policy covers that.) So thank you, train-stealing cleaning lady, for reminding me to be glad we don't live near any train tracks and to be very grateful that no one ever has driven anything into my living room. Now I'm going to bed to not dream about trains crashing into my house because I probably won't sleep yet again. When Husband finally gets home, I'm sleeping for a month straight.