Today I wore a skirt to work that I now realize needs to be altered or cinched in with binder clips. It is a very pretty plaid boucle skirt that is rather light weight for being a winter skirt. And it's kind of loose now although it was a form-fitting pencil skirt when I bought it. What happened is that I was wearing tights and I couldn't feel the skirt and I spent the whole day in fear that it had fallen down and I didn't notice it so I kept touching it to see if it was still there. Thank goodness it was, although it's so loose that I'm convinced that one strong cough and it will be around my ankles. I really need to find a tailor. Or more office supplies. Either one. The skirt looks a little like this, only I happen to wear mine with a shirt. Honestly, just who do they think is buying a plaid boucle skirt and why on earth would anyone show their bellybutton while wearing one? This is not the 1990s nor would anyone on Beverly Hills 90210 have worn this skirt. 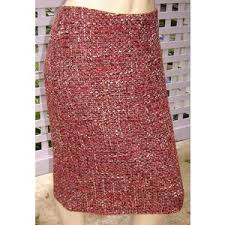 Today was a much longer day at work and I bounced from meeting to meeting to meeting. Sometimes, I think there is nothing that diplomats love more than a long boring meeting at which nothing is accomplished and is only an excuse for people to show how busy they are. But I dutifully went to all of them and I was exhausted afterward because nothing is more tiring than trying to stay awake when you are bored to death. Only the thought of my skirt falling down kept me alert. I was so tired after my exhausting day of meetings and skirt checking that I made Child 1 drive to Cafe Rio to pick up our dinner. I keep getting sick when we eat there, so tonight I am trying a cheese-only enchilada because they say that their chicken is not gluten-free. We'll see. For lunch today, I had pho which I found out you can get in the Department cafeteria and the noodles are made from rice! Also, when I picked up the "soy sauce" packet and I read the ingredients, I was delighted to discover it has no wheat in it. Also no soy. It is basically saltwater with food coloring, but OK! That means that sushi is also now not out of the question. I like some sushi, but I can't eat it without soy sauce and I'm too embarrassed to bring my own bottle so yippee for the fake soy sauce packets!

Speaking of Japanese food, the patrons at this restaurant in Tokyo are all having a worse day than me. It is supposed to be a French restaurant, but no decent French chef that I have ever known (and I've actually known a couple) would ever serve dirt. Yes. Dirt. The kind your plants grow in and you have to dig out of your toddler's mouth. They have a $110 menu where you get six courses of food made with dirt including dirt ice cream. It might look like chocolate, but it is not chocolate. 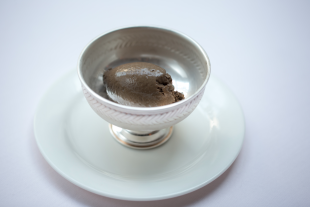 So thank you, fake Japanese French chef, for reminding me to go back to that great French place in Georgetown to have steak et frites with Bearnaise sauce (which doesn't contain wheat or dirt) and to be grateful that none of my children ever tried to serve me a mud pie and that the only dirt they ever really ate was crumbled oreo cookies on top of chocolate pudding. With gummy worms. That is my kind of dirt. I miss chocolate pudding. Sigh.