I was incredibly productive today, despite the fact that I got 2 hours of sleep last night. Child 3 was sick and said her tummy hurt so I let her stay home from school. I went to my incredibly boring meeting for 3 1/2 hours and then I went home to take care of her. She mostly slept and I washed the dishes, and then washed all the pans by hand and the crock pot and did two loads of laundry and paid a bunch of bills and did the grocery shopping and made the most delicious pasta for dinner and got the children to  study and take out the trash and help with dinner and unload the dishwasher and I took a nap. Oh, and I also chatted with Husband on the phone and cheered him up. I was a whirlwind of activity and I did it all in a 1/2 day. I am duly impressed with myself and if I could reward myself with chocolate and wheat, this is what I would eat. 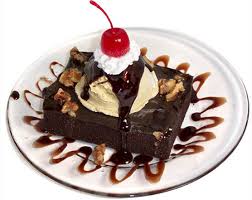 But since I can't ever have a brownie again for the rest of my life, I had to settle for a second helping of the amazing gluten-free pasta dish that I made up all on my own. OK, I copied the dish a friend brought over when I wasn't feeling well, but I'm very proud of myself because it was delicious and it got two thumbs up from the children. The Dog would have eaten it, too, if we had let her. As it was, she settled for Child 2's giant chocolate kiss which thankfully she only had a few licks of before it was discovered because all I need to complete my life is a sick dog.

I am stressed now after talking to other moms whose husbands are in Afghanistan that I have not yet hit the 1/2 tour slump. Apparently, most spouses whose husbands leave them for Afghanistan get depressed around month six because they realize they're only halfway done and it feels like what's left will take forever. and I totally don't feel that way. At all. Mostly because I have been depressed from the beginning and have hated every minute of it and it's already taken forever so now that we're on the down slope, I'm actually feeling more optimistic. I guess if you're in a slump from the very first day there is nowhere to go but up.

This Applebee's waitress in St. Louis is having a worse day than me. Her fellow server was stiffed on the mandatory service charge and tip by Alois Bell who claims she is a Christian pastor and she already gives 10% to God, so why should she pay a tip? More on that later. Here is a copy of the bill that the waitress (who wasn't the one stiffed) posted for her friend on Reddit. 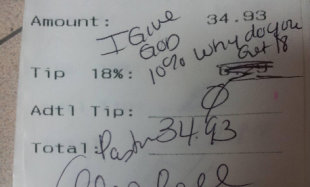 So Pastor Bell was mortified that her nasty little note went viral and was angry enough that she called the Applebee's manager to complain and the manager fired the waitress who posted the evidence of Bell's lack of Christian charity. So to the waitress, I am so sorry that your manager was a coward. Come to work at the Applebee's near me and I will eat in your section on purpose in order to give you a big tip.

To the manager of Applebee's in St. Louis, you are a cowardly jerk and you should be fired yourself. I hope all of your staff quits and you are forced to wait all the tables yourself and no one tips you.

And to Pastor Bell, the reason you give God 10% is because He gave you everything and 10% isn't much to ask in return. God does not work for less than minimum wage and doesn't really need your money, but the waitress does. Christian charity should demand that you are more giving, not less, and if you can't afford to tip at a restaurant on a $35 bill, then next time eat at McDonald's. You should be ashamed and I hope this experience helps you repent, although making restitution to the poor girl who got fired for defending her friend is going to be tough. Good luck. God will be watching, so you better not stiff Him on the 10% either.
Posted by Jen at 9:05 PM