I've never been a glass is half-full kind of girl. I learned very young that if you let people know you had anything in your glass at all, they try to take it from you. But today, we are finally half-way through this horrible ordeal. 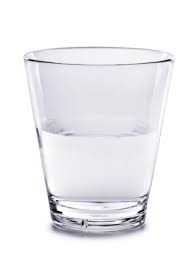 Husband has been telling everyone we were half-way through for about three months now, so you can see who the optimist in the family is. I am just relieved that we have made it this far. And please, well-meaning people, stop telling me "it will go by fast." Maybe it will for you, but for me, it has been the longest six months of my life. It's even longer than being pregnant, and I hated being pregnant because I was sick the whole time. I am still sick all the time and I don't get a cute baby at the end so this is way worse.

Speaking of being sick, I think Child 3 gave me her cold, so I am drinking apple juice for dinner and going to bed.

This thief is having a worse day than me.

First, he was arrested without a shirt and that is not a very flattering mug shot. But second, he was caught because he broke into a convenience store, did a lot of damage and stole a bunch of stuff. But he left a trail of Cheetos that led police right to him. He gets points for having good taste, but he looses all those and more for dropping the Cheetos like bread crumbs along the way. So thank you, Mr. Cheetos thief, for reminding me that Cheetos are for eating, not dropping, and to be grateful that I will never rob a convenience store, especially without my shirt.
Posted by Jen at 7:19 PM