Our house is too small for our phones. I may have mentioned that there are four of them, which now seems a little excessive since we still don't know what to do with the fourth. They also have this feature where you can transfer the call to a different handset which means that if I answer it in the kitchen, I can push menu-transfer-select-handset# and the other handset will ring for someone to pick it up. I'm pretty sure that's not as efficient as just yelling for Child 2 to pick up the phone especially since I'm certain every time I tried it I would transfer whoever it was into oblivion.

I'm so looking forward to the new season of Downton Abbey which begins tonight  The only problem with the new season is that Husband won't be here to watch it with me. I forced him to watch the first season and he's been hooked ever since. He liked it so much he pumped our British table mates on the cruise for information about the new season. I'm not sure why we like it so much, but maybe because it's so different for our life and everything we know and it's fun to look at all the clothing that is so beautiful and so extremely difficult to wear and take care of. Honestly, how did they keep all that satin and velvet so wrinkle free? And how on earth could they walk in those skirts without tripping and breaking their ankles? I hear the actresses wear Uggs under the dresses when it's cold. 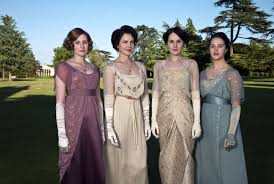 So I was all set to watch the new season, but now it's been usurped by Brave which is about a girl in Scotland who turns her mother into a bear. That actually might come true in our house, especially if anyone tells me what happened in episode 1 of the new season before I get a chance to watch it. I'm recording it. I feel like those people who watch football games late and have to avoid TV so they won't know the score. I don't want to hear about the wedding! So no facebook messages for the next day or so because I know all my friends and maybe even Husband will be talking about it. Grrr. I'm feeling like a grizzly already.

This iPhone thief is having a worse day than me. He took a phone someone left in a cab in New York City and started using the dating app on it. Unfortunately, he wasn't bright enough to change the e-mail address associated with the app and the phone owner not only found out, he posed as a girl and sent the thief a message and arranged a date. When the thief arrived, the owner met him with a $20 bill and a hammer. The thief gave up the phone and left. So thank you, iPhone owner, for reminding me to be grateful that not only isn't my phone worth anything, also there are no dating apps on it. Having already found my soul mate, I never have to date again.
Posted by Jen at 9:39 PM