Today was a banner day, if by banner you mean the kind that say "Go home Yankees!" or "Death to America" and have an angry mob behind them.

This day was out to kick me in the behind and it so did. Let's start with when I woke up, or more accurately when I didn't wake up until an hour after my alarm was supposed to go off and it didn't because I apparently didn't turn it on. Child 2 came in panicked and yelled why wasn't I awake and didn't I know what time it was? Because I overslept and no, apparently not. So I rushed to get ready and get up Child 3 who was also still asleep and she just made it in time to the bus but I was 15 minutes late to the metro. And once I was there, I realized I had completely forgotten both my phone and my iPod. Too late to go get them! Luckily, I had knitting I could do on the commute to keep my occupied because I'm still not finished with that darn scarf.

I managed to make it to work just on time and started right in on writing something I was supposed to be writing and completely forgot about a meeting I was supposed to go to. Two of my friends who I really love were supposed to get married this week and broke up instead. (I know, that's not about me, but my heart aches for them.) I spilled balsamic vinegar all over my white sweater. I remembered my knee brace, and my knee still really, really hurts. I told Child 3 to remember to go to after-school care when it is a Friday and she's supposed to go to piano lessons instead and I didn't have a phone to call when I remembered. Luckily, Genevieve is our piano teacher and knows I'm a little distracted at the moment. Child 2 is at a party and was supposed to get a ride, but she didn't and now I have to go pick her up. And then Child 3 did the thing she is not supposed to do with her chair even though I have told her a million times not to do it and so has Husband and Child 1 but she did it anyway and she broke my hand-painted glass ornament from China that Husband gave me. So all, it was not a good day and I didn't even include the part where someone's school counselor called me.

But two good things: 1. I got to see my friend "Jonas" who is visiting from Moscow, and 2. I ate potato skins for dinner because it was that kind of day. Child 3 says potato skins are the best potato recipe ever. But that was before she broke the ornament.

Speaking of broken things, the owner of this guitar is having a worse day than me. 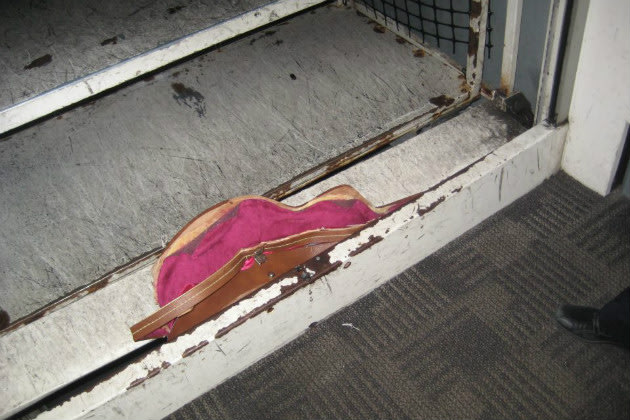 He tried to take it on a Delta flight but they wouldn't let him even though they had every single time before and instead of taking care of it like they promised, they crushed it in an elevator. It will cost around $2000 to fix, which is good because in this photo, it looks like a total loss. And of course, Delta will not pay for it, because American carriers stink. So thank you, sad guitarist, for reminding me that things are just things and glue will fix the ornament (sort of) and I love Child 3 more than an ornament anyway and I just so wish Husband were here to hold me and tell me it will all be OK right after he walks The Dog. But of course, he's not so I have to go walk The Dog and pick up Child 2. Ugh.