Today started out great and I had high hopes that it would be a decent day, and then it all went down the toilet, almost literally.

Father-in-law was in town and he came over in the morning and we made pancakes with coconut syrup, which he highly approved of. The pancakes were even partly whole wheat and the children didn't even notice. The online grocery store we use delivered on time, which was great otherwise the pancakes would have been entirely whole wheat and the children would have noticed and Child 1 would have asked what was wrong with the pancakes and refused to eat them and complained that I was trying to poison her or something. And the maids came on time, and I dropped the children off at their activities on time and took Father-in-law to the farmers market and bought delicious home-made pickles and then drove him to the airport in time for his flight which was great considering last time he visited us he missed the flight. Here is a picture of half-sour pickles so you can see how yummy they look. Child 2 loves them and Father-in-law agrees that she has good taste, except I bet he would like my lasagna which Child 2 still insists isn't as good as the frozen kind. So wrong, that Child 2. 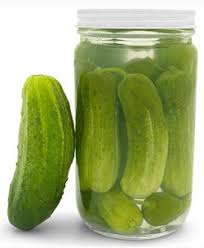 But then, I came home and I thought someone was in the shower but no one was. It was the toilet which was running at full speed without stopping. So I lifted the lid like I knew what I was doing which is totally not the case because I know less than nothing about plumbing. But I realized that the rubber thingy at the bottom was in pieces and had completely disintegrated. So I looked closely at the thingy and realized that it looked like the USS Reliant on Star Trek and I went to the hardware store and bought one that looked like it and tried replacing it and it worked! Well, that's an exaggeration because "working" apparently means only if you stick your hand in the tank and fiddle with the rubber thingy which I learned is called a flapper because it is the wrong size. I must have bought the Voyager instead of the Reliant. Oh, and I yelled at Husband because I was mad that he is not here to help me and I feel completely overwhelmed and I have no idea how many flappers I will have to buy until I find the right one and I'm running out of Star Trek names to compare them to and I'm so angry that I have to learn about flappers and they have nothing to do with the Roaring Twenties or fashion. And now I am completely depressed and I can't even have chocolate because God hates me and made me allergic and Husband said to watch a funny movie but I can't think of one I want to see so I'm just going to sit here and be sad and not eat chocolate and try to ignore The Dog who is snoring in the pile of laundry I have to fold before I go to bed. I. Hate. My. Life.

OK, one other good thing, though. Remember that clothing store full of glitter that I hate? Well, Child 3 said today that it looked like a Unicorn had barfed all over it and she asked me if I could take her there to buy some unicorn barf which made me laugh. I did because we really needed retail therapy after the toilet incident and I may have also stopped in a not-British shop and bought some boyfriend jeans because they look really good on me and I'm so glad they are back in style. They have no unicorn barf on them at all.

People at the Texas State Fair are having a worse day than me. Specifically, the people on this ride. 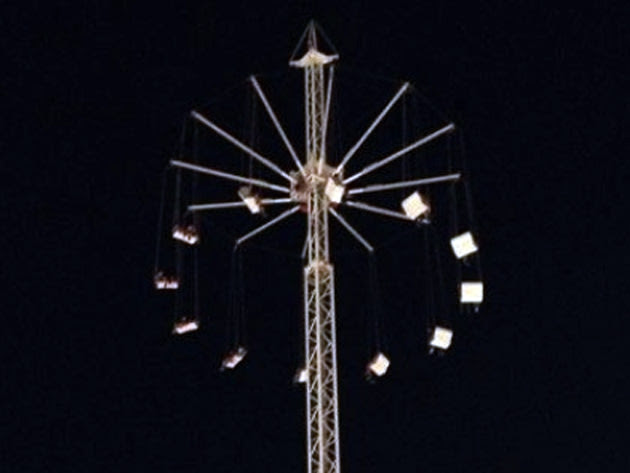 Apparently, the ride broke and they were stuck 200 feet up in the air for over 2 hours. Although I grew up not far away, I never got a chance to go to the State Fair because my parents would never take us even though everyone we knew always went every single year, so I don't know what the Stratosphere is actually like. But I can imagine that it was not fun to be up there for two hours and that by the end, quite a few of them were really angry and probably had to run to the restroom. So thank you, Texan fair goers, for reminding me that occasionally it is good to have parents who hate fairs, and I hope you got your money back from that ride.