I firmly believe based on personal experience that it is impossible to go to the Virginia DMV and get what you want in one trip. Impossible. Because I went again today and I still didn't get everything I needed and I almost got nothing at all.

The first thing you should know is that I stayed home sick and I had no intention at all of going to the DMV because I woke up really sick to my stomach and with a migraine. No fun, right? But yesterday, we noticed that the temporary plate was no longer on the front of the Volvo and I was worried about Child 1 driving around without it, so I dragged myself out of bed and we went when she got home from school. I also had to give her a tutorial on how to pay for gas with cash, which is something I had grown up doing but now I realize she has only ever seen me pay at the pump. But that's another story.

So I go to the DMV which I hate but there is a satellite office in town and I was told by the dealer we could get plates there so off we went, arriving at 3:45. They close at 4:00 sharp but there was no line and we were good, or so I thought. You see, I mentioned before what an ordeal it was to renew my license last time which took several trips to the DMV, multiple asking for supervisors, and finally phone calls to Richmond, VA from Seoul, Korea. Honestly, they actually make you want to take out your eyeballs with a spoon rather than have to deal with them. The issue last time is that they will only mail the license to the address on the license and they wouldn't put my APO address on it because that meant I was no longer a VA state resident, except that I own a house in Virginia and I pay taxes to them and I still vote there. But apparently none of that counted at the DMV and they canceled my license. Infuriating, no? They will take my taxes but they won't provide me services. I should also mention that the State of Virginia goes after Foreign Service Officers who are former state residents but then switch to another more welcoming state when they move overseas. They will actually take you to court and make you pay back-taxes if you move back to VA for more than six months at a later date.

So after successfully fighting and receiving a license, mine now has my APO address on it. So when I went to register the car, they asked if I wanted to change my address and I said yes. That was my mistake. Because you see, to the VA DMV, I am not a state resident! I live in the state, and I pay taxes, even more now that I am registering cars here, but because my license has an APO address, I am from out of state and the satellite office would not change the address on my license. And they almost wouldn't give me plates for the car until I started saying how much I hated the DMV and asking exactly how many hours of my life I would have to waste at the DMV not getting service all because I am serving my country by living temporarily overseas. So they just issued the plates anyway and told me I would need to go to the regular DMV to change everything else. This was after they made comments about how much I didn't look like my picture any more, which I supposed was a dig at my appearance because I was sick and looked it. So I'm just wondering, has anyone ever gone to the DMV and actually been successful in doing what they set out to do because so far, it's taking me an average of 3 trips per issue to do completely normal things. I feel like I am trying to follow the rules and they are punishing me for it. I am convinced that when I die, if I end up in Hell, it will be exactly like the DMV.

Obviously I'm not the only one and I only wish I had thought of this first: 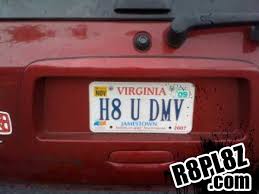 This Cleveland bus driver is having a worse day than me. He got mad at a passenger who was being rude, punched her with a pretty powerful uppercut, and threw her off the bus. He might have gotten away with it, but someone with a cell-phone camera documented the whole thing. Now he's been suspended and the city is investigating. So thank you, Mr. bus driver, for reminding me that no matter how infuriatingly bad the service at the DMV is, I will never, ever punch one of them. Complain about their abysmal non-service in a public forum? Yes! But physical violence--not ever acceptable.
Posted by Jen at 8:34 PM