Bad Day 91--Somebody had a brilliant idea

While we were gone from the US, someone at Taco Bell thought it would be a good idea to make taco shells out of Doritos, and it was the best. idea. EVER! 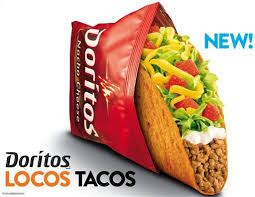 I don't know why someone didn't think of this earlier and I so wish they sold the taco shells like that in the grocery store, but they don't which ensures that whenever I ask Child 3 what we should do for dinner, she says, "I don't know. Maybe Taco Bell?" Child 3 has been having some homework issues, so I signed her up for the after-school care program and today was her first day. I was nervous that she would hate it, but she loves it and discovered that some of her friends go there and they make her do her homework and then she can climb on the rock wall and I am hoping it will totally solve the watching Disney channel instead of doing homework problem. After we came home and ate the yummy tacos, she helped me clean up the kitchen and asked, "So, have you been visited by any aliens today?" I was perplexed for a minute until I remembered my earlier post and said that no, I was pretty sure it was my children and not aliens who did not do the dishes yesterday. She then told me she thought the aliens were going to come help with her homework. Love that Child 3.

So we live in a swing state which doesn't mean that we have fun on playgrounds but that the presidential election here is neck and neck and it is so not like a playground unless everyone at the playground is really mean and says nasty things about each other and implies you are stupid for not believing them. And you can't get away from it because the election is everywhere and if you try to avoid it all, they call you on the phone! And bug you at home! While you're in your jammies trying to escape all the stress! So I have taught the children they are free to hang up on all election calls which they do after saying things like I'm only 9 or I will never vote for you because you will be dead by the time I am old enough to vote or go jump in the lake. I have taken to flat out lying to the pollsters and telling everyone who calls that I will vote for their candidate so they will just shut up. If there are other people out there in swing states who feel like I do, then you can bet that polling numbers are completely wrong in every possible way. Although that might be why the race is so close and it's just feeding the beast. I'm not sure, but I am sure that I will really not like politicians or have any more confidence in them if they keep behaving this way for three more weeks.

At any rate this model is having a worse day than me. There were several people who suggested the man who died after eating roaches. But since he passed away, it is a real tragedy for his family, so I can't in good conscience mock him. My sympathies to his loved ones for their loss. But this girl is living her dream in the most ridiculous shoes ever. 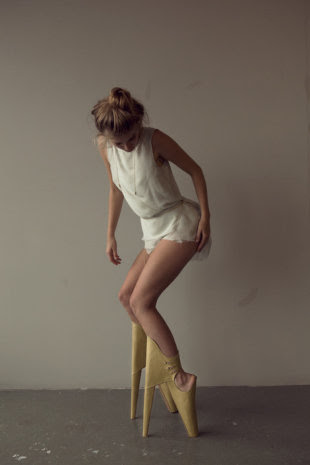 I'm not sure why the designer calls these "shoes." I mean, they look like shoes and they sort of go on your feet, but they are impossible to walk in and work more like stilts, or torture devices for that matter. Scary. Fashion can be frightening. So thank you, unlucky model, for reminding me that I don't have to succumb to anyone else's idea of beautiful and that common sense is sometimes more important than fashion. But only sometimes. :-)
Posted by Jen at 9:01 PM