I have this theory that people who grew up after digital cameras were invented are much more comfortable with pictures of themselves than those of us who didn't. I base this theory on a long-term, exhaustive study of a large sample of children. OK, really just my children and really mostly Child 1 and Child 3. Child 1 posts a lot of pictures on facebook. And there are approximately 8 billion pictures of Child 3 on our computer, all of her making various faces, sometimes with props. My favorite is the one with the Groucho Marx glasses and a fake eyeball. Child 1 found it and sent it to me one bad day to cheer me up and it totally worked. I would post a picture of it but since I don't want to even reveal their names let alone their pictures, here is one of Groucho Marx instead. 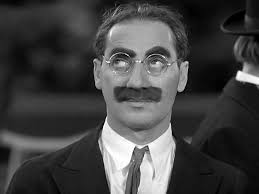 When I was Child 3's age, I didn't own a camera. When I finally got one at age 12, I was so happy that I took an entire roll of film the first day which meant a whole 12 pictures and I got a lecture from my mother on wasting film on unimportant things. But back then, not only did you have to wait until the roll was finished before you could develop it, then you had to wait for the pictures to come back which took a few days, and when they did, they were always over exposed and grainy and most of them looked horrible, but you still had to pay for them anyway. I have thrown away a lot of bad photos of me so as a result, I think there are a total of 5 in existence and most of them are from before I was 2. OK, that's an exaggeration. I have a couple of my wedding, so maybe there are 7. Not anywhere close to the 8 billion of Child 3. Child 2, you need to take some more photos to catch up. Get snapping!

This grocery store worker in New Mexico is having a worse day than me. He found a loaded pistol in a box of ribs. Seriously. Here is a picture of the very scary gun. 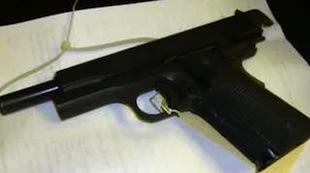 What is a loaded pistol doing in a box of ribs, you may ask? I have no idea, and I hope I never have to find out. But not only was this guy probably given the fright of his life, now the police are mad at him because apparently he wiped down the gun before turning it in. To be fair, it probably had icky meat stuff all over it, but still, has this guy never seen an episode of CSI, or NCIS, or Law & Order, or The Closer or Hawaii 5-0? I think there may be a police procedural drama on every single minute and they all show how important fingerprints on the gun are, which unless you are living in a bubble and only watch nature-documentaries on PBS, you would know. So thank you, Mr. Shelf Stocker, for reminding me to be grateful that I have never bought meat that included a gun. Then again, I have never bought ribs, so maybe that has lessened my chances.

Btw, the tests went fine in that I don't have cancer, but still no answers. Extra props go to my friend "Stevie" for not only getting up to drive me at 5:45am, but also bringing me dinner even though I told her not to. She totally rocks, and so does her potato soup.
Posted by Jen at 8:01 PM