I'm trying to go gluten-free again, and it's really, really hard. I went to Taco Bell for dinner because I am too tired to cook and it's on the way and when I come home and say it's time for dinner and the children ask what are we eating and I say Taco Bell, they jump up and down and cheer. Literally. They are teenagers and they are still thrilled by soft tacos. So I know that soft tacos and burritos are made with flour tortillas which would not be gluten-free since they are made from wheat which has gluten. But hard-shelled tacos are made from corn flour, so I thought that would be OK and then I had a brilliant idea which is that Doritos are also made from corn so that would probably be OK. But guess what? Not only does the nacho cheese flavoring have gluten, (although seriously why does powdered cheese need wheat?) but so does the meat! Ugh! So we'll see how I feel in a little bit. I'm still hoping that my doctors will find some answers, but in the meantime, I think I felt better when I wasn't eating gluten, so I'm trying that again. Trying would be the operative word because I have no idea what I'm doing.

But you know what is gluten-free? Cheetos. And ice cream. And Cheetos! So guess what I'm having for lunch tomorrow? Something completely unhealthy. But I might have a little salad just to even things out. I have to enjoy what I can and the only side benefit of this whole health mess is that I'm still losing weight, so I can have all the junk I want, which won't be very much because about 1/2 of one serving usually fills me up pretty fast. As long as it doesn't have gluten, which Cheetos don't. I wonder about Fritos? 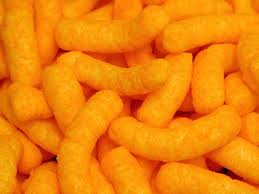 These iPhone users in Australia are having a worse day than me. Apparently, the map app in Australia doesn't work very well and is misdirecting people. Instead of giving directions to the lovely town of Mildura which looks like this:

the iPhone is giving directions to Murray-Sunset National Park which looks like this:

Not quite the same, is it? Not only that, it sends them off on a dirt track and several people have been stranded after their cars got stuck in sand. Without food or water. In 115 degree heat (which is 46C for you metric people.) Not really the fun vacation that most of them had in mind and rather dangerous because apparently there are lots of deadly snakes in the park. Things are so bad, that the police have warned people to stop using Apple Maps to find Mildura because they are tired of rescuing people and they worry that something bad will happen. So thank you, Apple, for reminding me to be grateful that I couldn't afford an iPhone and thank you, Google, for always directing me well. Now if someone will get on that app that will fold my laundry for me. . .