I have neglected my children's education. We're watching Star Trek: Generations. I was explaining stuff about The Next Generation, and Child 1 asked why she did not grow up watching this show. I guess probably because we never found it on AFN.

AFN is the TV station the military broadcasts via satellite to troops around the world. We got it in both Korea and China and it was great for watching new series, but not so great for re-runs. But now that we are in the US, we can watch re-runs to our hearts' content on Netflix and Amazon--assuming our TV holds up. Husband bought it in China, and let us just say that like many things bought in China, it is not as reliable as one might hope. Sometimes, the only way it will turn off is to unplug it. And sometimes it gets funny green lines all over the screen. And then once a black spot started in the middle and grew until it covered the whole screen and it was black. So we'll see.

Now Child 1 is lecturing me about decaying orbits and how it is technically not the same thing as crashing but a crash is the result of a decayed orbit. I can see that I need to brush up on my science in order to watch these movies with her. Artemis told me today at lunch that technically, the spectacles that Bones gives Kirk in Star Trek VI are older than the universe. I think I may not only not be smarter than Foreign Service Officer, I might also not be smart enough to be a Star Trek fan.

This man in London is having a worse day than me. He was caught by customs with luggage full of dried caterpillars. 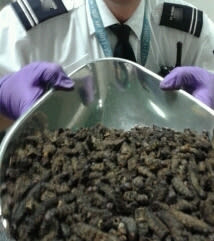 That his suitcase was full of dead insects wasn't the problem because he brought them on purpose. The problem is that he thought they were food. Seriously! He brought them to England to eat. So thank you, Mr. Bug Lover, for reminding me to be grateful for the gluten-free Domino's pizza I had to eat tonight that was not made of bugs, as far as I know. And thank you, Child 3, for finding out that Domino's has gluten-free pizza. I hate that my children have to take care of me, but I'm glad and proud that they do.
Posted by Jen at 11:30 PM