Spring is supposed to have arrived and there are crab-apple trees blooming but it is still freezing cold. Literally. It was 34 degrees when I got in the car this afternoon. And that is not Celsius, that would be Fahrenheit. What happened to spring? That stupid groundhog said it would be an early spring and he so lied because here it is six weeks after February 2nd and it's still too cold to put away my winter clothes. Which is a bummer because today I tried on my too small Olympic t-shirt and. . . it's no longer too small! It's a little snug, but not obscenely so and I wouldn't be too embarrassed to wear it in public, so there you go. Take that you evil British designers who have different sizing! I can actually fit into your clothes now! Unfortunately, it is way too cold to wear the T-shirt, so it will go back into the Drawer of Things I Might Fit into Someday which is now the Drawer of Things That Are the Wrong Season. I cannot tell you how odd it is that I not only fit into my skinny pants, they are now too big. 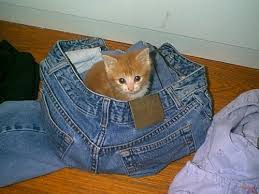 OK, they're not that big, but you get the idea. Child 3 likes this picture. She loves cute kitten pictures.

My friend "Stevie" dropped by tonight with some gluten-free lasagna which I am so excited to try. Tomorrow, when the children are all out at their various activities, I am going to eat it all by myself and not share it. OK, maybe I'll share a little with Child 2 because she isn't going out, but only a little because she doesn't like lasagna. OK, it's just my lasagna she doesn't like, but still, that's no reason to share Stevie's with her which was clearly intended for me. OK, not just me because Stevie too nice to not make enough for everyone. Alright! Everyone can have the lasagna, but can you please leave enough for me?!

Jennifer Capriati is having a worse day than me, and not just because she is wearing ugly white barrettes in this picture.

Ms. Capriati, whom you may remember for being a teen tennis prodigy who later flamed out, has had a few run-ins with the law and also apparently has terrible taste in men. She had a big fight with her ex-boyfriend and she sort of stalked him and stood in his way of the locker-room door and pushed him and hit his chest. Now, Jennifer is an athletic girl, so she probably can pack a punch, and it is understandable that the ex-boyfriend was upset. So he called the cops and they issued a summons for her to appear in court where she will be charged with stalking and battery. So thank you, Ms. Capriati, for reminding me to be grateful that all my exes live in Texas. No, not really, but some do and the rest I have no contact with so who knows where they are. You see, when you break up, that is supposed to end the fighting, so quit stalking your exes and get your life back together. No amount of yelling and screaming will make him love you again--it will just make you embarrass yourself and turn you into a sad laughing-stalk. Have some pride, girl! You should be as fierce about succeeding in life as  you were on the tennis court.
Posted by Jen at 9:39 PM