Until you subtract it from 365. Then it's way too small. Still, it's progress. At least I'm not on day 3 anymore and I am closer than ever to fitting into my too small Olympic T-shirt. The Old Navy one fits and is even a little loose and I want to get into the British one before I go to London. I have about three weeks.

Today was yet another doctor's appointment which meant yet more take-out for dinner. I had planned to make spaghetti because I am determined to make dinner at least once this week, but the appointment went too long and there wasn't time. We'll have to try for spaghetti tomorrow because I have fresh mushrooms and they must be used. Also, I'm craving pasta and the corn spaghetti I found is delicious.

Instead of lovely home-made spaghetti, we tried the Caribbean place that just opened up down the street and it turned out to be a hit. Not only do they sell a whole roast chicken already quartered, it's not too expensive and it's pretty good. They have fried plantains, which I love, and the manager was happy to take the time with me to go over which menu items I should avoid and make suggestions. Child 3, who went with me to get the food, gave it a thumbs up because it has a big aquarium inside with clown fish, anemones, and snails. She thought it was better than Finding Nemo, and in fact, made up her own dialogue to go with the fish antics, mostly about fish waiting in line for the bathroom. No, I don't understand it either, but I'm not a 10 year old girl. Apparently they would all find it quite amusing.

Finding Nemo has always been one of Child 3's favorite movies and was the favorite, OK the only movie she would watch for more than a year when she was a toddler and I have seen it about 1,000 times, (no exaggeration really,) and I still enjoy it. When I took her to the Sydney Aquarium in Australia when she was two years old, she spent a lot of time running around pointing at fish and saying "Nemo!" It was adorable and the people of Sydney loved her. Child 1 and Child 3 were not amused by the seagulls that stole their fish & chips, though. After that we understood the whole seagull theme in the movie. Child 2, who was 5 years old at the time, just sobbed for her lost fries. I don't think she cared that much about the fish. 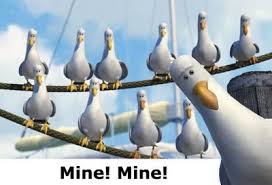 At any rate, the Caribbean dinner earned three thumbs up, especially the coconut flan, and I see more plantains and flan and chicken in our future. But not until after I make spaghetti.

My friend "Brynn" witnessed someone having a worse day than me today. She was over at a friend's house when they noticed the neighbor's lawn was on fire. The homeowner (not Brynn's friend, but the friend's neighbor) completely freaked out and ran around in circles screaming that she didn't know what to do and she didn't know how to use a fire extinguisher. Brynn, who had never used a fire extinguisher until that point either, calmly put out the fire with her friend (who also contributed her own fire extinguisher and garden hose) and the lawn guy and even managed to teach the panicked homeowner how to aim the extinguisher so it actually put out flames instead of just dripping pointlessly on the grass. By the time the firemen arrived, the fire was out and the house was not even damaged. So here's to Brynn, for keeping cool in a crisis. I would seriously vote for you for president. And thank you, Ms. Panic Attack, for reminding me that screaming helplessly while someone else saves you is really annoying and probably not a cute as you think it is. And thanks also for the reminder to get some fire extinguishers because I just realized we don't have any and they might come in handy if we set more napkins on fire which we did once with a candle and the children thought that was fun. Actually, I'd better get several extinguishers.