Happy Chinese New Year! It's the year of the Snake, but apparently snakes are bad luck, so in China they are still celebrating, but people are trying to forget it is about snakes so they are just pretending it has nothing to do with snakes. To celebrate the new year, we had some friends over to eat western red things with fried eggs. In English, that would be scrambled eggs with tomatoes, but it's much more fun to call the dish by its literal English translation. We also had fried rice, which must have tasted pretty good because I made a lot and there was not very much left.

I had a lot of fun, but someone please remind me not to schedule a dinner party on the same day as a Girl Scout sleepover ever again because I am so exhausted I can hardly see straight. I got about 2 hours of sleep at the sleepover, not because the ghosts kept me awake, because they were all nice and quiet, but because I don't sleep well anywhere besides my bed and also there were 30 laughing, giggling girls getting up to go to the bathroom every five minutes and the floors creaked. Other than that, it was fun, but I hated the not sleeping part. So to ensure that the children keep me up all night because they are having nightmares, we are watching The Witches. In my defense, it was completely their idea because they loved the Roald Dahl book, but I had forgotten just how scary this movie is.

I also forgot that the first part was filmed in Norway. In Bergen, to be exact. Someday I have to get back to Norway. In the summer, though. I don't think I could take another winter there--cold and dark is not my thing. The northern lights are amazing and perhaps the most beautiful thing I have ever seen which you cannot capture on film, but all things considered, I prefer palm trees and the beach. For my next post, I'd like somewhere tropical.

Speaking of freezing weather, these people in Sweden are all having a worse day than me. 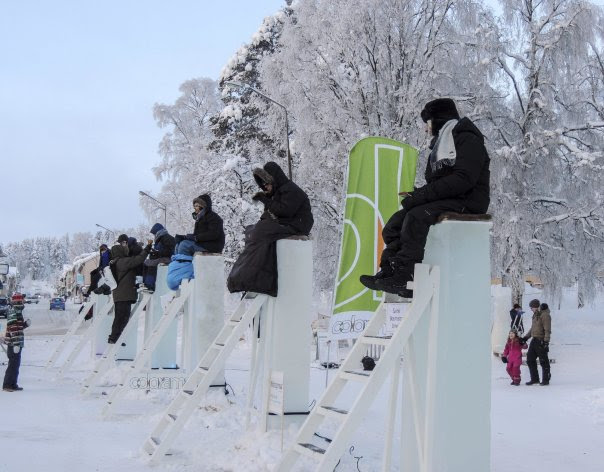 Those are pillars of ice they are sitting on. On purpose. For fun. For 48 hours. OK, it's really to win a contest, but apparently they are not allowed to read and they can only get down to use the facilities every two hours. I'm not sure what they win if they make it the whole 48 hours, but whatever it is, it is completely not worth it. Unless it involves Husband coming back from Afghanistan early. That is the only thing I would endure 48 hours of sitting on ice for.