Child 3 now has rash all over her face and I was in bed at 7:00. I've just about had it with all the illness and sick days. Couldn't we have just one week where no one is sick and I don't have to visit the doctor? This is how bad it's gotten--I am on a first name basis with all the pharmacists at our pharmacy. They even call me at home to remind me to renew my prescriptions. Yep. At home. Personally. We're friends. They are nice and all, but I would rather they have no idea who I am. Seriously, I am about to lose it. I'm so upset that I had mango frozen yogurt and tortilla chips for dinner and I'm now in bed. Not in my jammies, though, because I think I have to go pick up Child 2 in a few minutes.

I told the children that I needed some time off when Husband gets home and they panicked. No, you can't leave us alone for a year! I don't want to eat fast food every night and listen to NPR! I quickly explained, before the panic escalated, that I just meant I didn't want to drive anywhere or take anyone to the doctor. It's going to take me years to build up my sick days again since I've depleted most of them. Sigh. Thank you so much, Department, for supporting tandems separated by unaccompanied tours. (That was sarcastic, btw.) But I suppose I should just be happy that I have a job. Of course, when the furloughs start happening, I will just make sure people only get sick on Thursdays, or whenever it is that I am not getting paid and don't have to go in. This is how happy the Secretary of Defense looked when he announced that they would have furloughs if sequestration happens, which it probably will.

Everyone is fairly certain that there will be furloughs which will wreak havoc on the Department but we don't have any say. It's all up to congress and since fewer than 9% of Americans actually believe congress is doing a good job and I am not one of them, you can see how much I believe in their ability to make things work. But what I want to know is, will their staff be furloughed, too? Or do they still get to draw a paycheck for doing brilliant things like writing embassies and asking them to send maps. Apparently, no one in congress has ever heard of Google Maps.

This 104 year old woman is having a worse day than me. 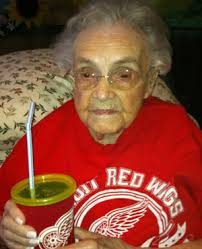 Her granddaughter helped her set up a facebook page, but apparently facebook is ageist and discriminates against people who are older than 99. It won't let her put in her correct age, so she has to lie and say she is 99. Now, she seems quite spry to me and could totally pass for 99, maybe even 95, but after you get to 100, you shouldn't have to lie about your age. I mean, I won't, when I get there in, um, 64 years. Or so. Ish. So here's to you, Ms. Joseph. I hope I am as cool as you are when I get to be your age. And thank you, facebook, for reminding me to change my birth year. I might just start shaving off a little now so I don't have to later. Oh wait. I just checked and it's not on there at all. Perfect!
Posted by Jen at 8:36 PM