Bad Day 220--In space, all warriors are cold warriors

We're watching Star Trek VI which I have to admit is my favorite, even though it has Captain Von Trapp playing a villain. A villain who quotes Shakespeare really, really well. You haven't experienced Shakespeare until you've read it in the original Klingon. I love that line. I did not read Richard III in Klingon.

I took the day off today and we went to Monticello with Sister 1 which turned out to be a big mistake. Beautiful, isn't it? But the cause of much drama today.

Child 3 got locked out of the house because the latch on the back gate broke again. This was after the school had called me to tell me that someone had accidentally hit her in they eye with a hockey stick. Then I got a call from Child 2 saying she had missed the bus and there was no late bus and could I come get her. I said of course, in three hours. So I called Genevieve who kindly went to the school to pick her up and apparently gave rides home to two other kids who had also missed the bus. I so owe Genevieve dinner because she is amazingly kind and I ask way more of her than I am able to give.

But the weather was at least beautiful while we were at Monticello and Sister 1 had a great time and said she had always wanted to go there her whole life. It was a lot of fun and super interesting. And we got 2 dollar bills as change, which is also really cool.

People injured by the meteor explosion in Russia are having a worse day than me. The pictures look like stills from a movie about the end of the world, which many people thought it was. 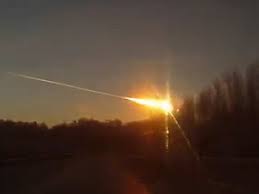 Apparently, the shock wave broke windows and blasted open doors. Many people were injured by flying glass. I hope they will all be OK. But thank you, meteor victims, for reminding me to be scared to death about getting hit by space debris that explodes all my windows. Something else for me to stay up awake worrying about.
Posted by Jen at 11:24 PM