Tonight was Girl Scout Thinking Day, which if you don't have a Girl Scout in your house you might not know that thinking day involves large numbers of girls learning about different countries and yelling. You know what you can't do on thinking day is actually think because it is so darn loud that you can't hear a thing and I spent the whole time saying "what" and "India!" And I sincerely hope that no one was asking for directions to the bathroom because I just sent them across a couple of oceans and a continent which is a looong way to go to get to the bathroom.

Child 3's troop was India which was brilliant because their swaps were extremely popular. Swaps are what you sell to other girl scoutsBecause what girl could resist bangle bracelets and bindi jewels? They also had bags of colored chalk which you are supposed to throw in the air during the Holi Festival which thankfully no one did because I didn't know color could make noise. Holi looks like this. 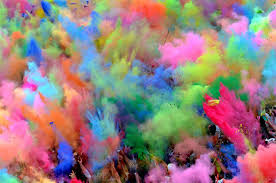 My friends "Sparrow" and "Rabbit" went one year and I am totally jealous and although Sparrow said it was loud and crazy and they needed male protection and afterword they looked like they were part of a technicolor dream, it probably wasn't as loud as thinking day.

This father from New York is having a worse day than me and he deserves every minute of it. 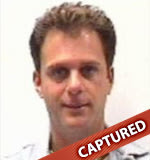 He is what is know as a deadbeat dad. Instead of paying child support for his children from two failed marriages, he fled to Thailand. Yep. He ran. I don't even know how to start that conversation with children who will know that their father actually ran away across the world rather than take care of them. So thank you, Mr. Deadbeat, for reminding me to be grateful that although Husband is across the world, he did not run away. He may be in Afghanistan, but he is still a really great dad.