Child 3 is sicker than ever. This poor thing is going to spend the rest of her Spring Break in bed. She has a fever and a stuffy nose and a cough that sounds like a seal. If it gets much worse, we will go to the doctor. At this point, I know exactly what the doctor will say which is give her plenty of fluids and send her to bed. She couldn't even be tempted with french fries today, so I know she feels awful. Poor thing. The only thing worse than being sick during vacation is, well, I don't know what's worse. Maybe being allergic to wheat? Oh wait, I think she wins that contest, too. Really. I feel so bad for her, I just want to kiss her cute cheeks and make it all go away. Instead, I gave her some advil and sent her to bed. I hope she sleeps and that her coughing doesn't wake her sisters.

Husband is snoring again. I think this may be the one R&R where he doesn't fully adjust to our time zone because he won't be here long enough. But he did manage to stay awake long enough to help Child 3 with a little homework and to have yummy Indian food for dinner. I am so full, I think I might burst. Indian food, aside from the naan, which I don't eat, seems to be pretty safe. They don't make their sauces with flour and naan is usually cooked on a separate grill or oven. I'm feeling OK and the burning on my tongue is from the spice and doesn't feel the same as when I eat wheat which makes me feel like I've scalded my tongue with hot soup. I had french fries the other day and as soon as I'd had about three bites, I could tell there was a problem. I guess that's a good thing, because it makes it easier to stop before I've had too much, but I'm so sad that most places make fries in the same oil as other batter-dipped stuff, so that makes them no good for me.

Husband and I were talking about my current job today and how much I love it and how it is completely his fault because he made me take the foreign service exam even though I was reluctant. He said he took great pride in stealing me away from Gymboree to work in federal government and he was happy that all my salary wasn't going to clothing. OK, most of my salary doesn't, although you might think that it does given the number of purses and shoes and cardigans I have bought since Husband left for Afghanistan. But when I worked at Gymboree, which is a children's clothing store in a shopping mall, all of my salary went to clothing for the children. All of it. I don't think I netted a single penny in four years, which is the problem with getting a 40% discount in a store that has adorable clothes and you have three daughters. I didn't make much money to begin with, and I tried to tell Husband not to think of it as money but as free clothing. However, he didn't feel like they needed that many items of clothing, which is probably true given the boxes and boxes of clothing that I have donated to friends and charities over the years when the children out-grew them. But it was a fun job and I liked it, but not as much as being a foreign service officer. Still, when people ask me what I did before joining the State Department, I love telling them that I worked retail in a mall part time while I stayed at home with the kids. Never, ever underestimate stay-at-home moms. Someday, we might just rule the world.

This man in Glendale, California is having a worse day than me. You would, too, if this was where your car ended up. 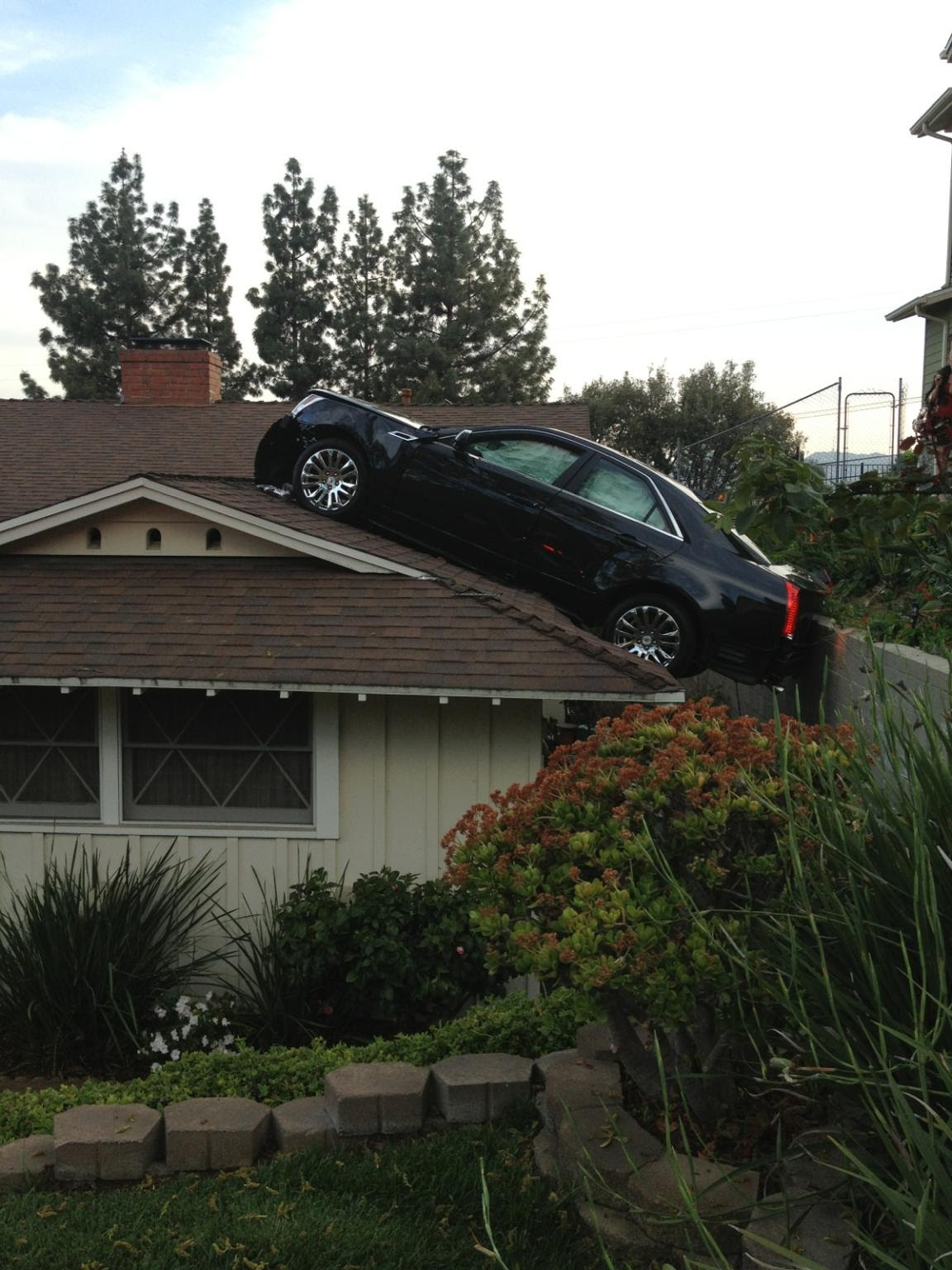 Yes, that is his neighbor's roof. He says the brakes failed, but he must have been going super fast down his driveway to end up on the roof of the house behind him. He says he couldn't see where he was going when the airbags deployed. That is probably true, but usually they deploy when you hit something, like a roof. So thank you, Mr. California Driver, for reminding me to be grateful that I live on the top of a hill so it is extremely unlikely that anyone's car will end up on my roof. If it does happen, I will be sure to let you know, and it will certainly be Husband's fault. (Just kidding. I will blame it on Afghanistan.) Props to Sister 2 for realizing that this man's day was way worse than mine, even given my sick child. (Poor thing!)
Posted by Jen at 6:58 PM