We have ants. On the second floor. How or why we got ants on the second floor, I don't know, but I suspect they are carpenter ants which is not good. I bought some ant traps so we'll see if that works. If not, we'll have to call the exterminator because carpenter ants are evil and I don't want them in my house. At least they don't fly like the ones in Norway where we once had a swarm in our apartment and I got some in my hair which I still have nightmares about.

These are marching ants which are a lot easier to kill. If worse comes to worse, I'll stomp on them. Or maybe I just will anyway.

Husband feels that last night's post wasn't fair to him, and he is right. First, twenty years between saying stupid things is a pretty good record. Second, he hasn't brought Dumb Kimberly up since before we were married. And third, I have said some pretty idiotic things myself including the time I asked him if he was trying to kill me because he put the knives point up in the dishwasher.

Of course, that was before I realized that a) you shouldn't ever wash knives in the dishwasher because that makes them dull and b) if I complained about how Husband loaded the dishwasher, then he wouldn't want to do it any more. Now when people want to help load the dishwasher, I let them and I never care how it is done because that means that I am not the one doing it.

The children are all away at activities again, so I am on my own with The Dog and the ants which means, of course, I can do what I want except that I can't think of anything I want to do. So I might just go to bed. But before I do, I should mention that Husband's Niece 1 sent us a box of caramels to cheer us up because she knows I can't eat chocolate. That was an adorable gesture and even sweeter when you know that she is only 17. So thank you, Niece 1. The candy was delicious.

Sister 2 alerted me to the story about this man from New Hampshire who is having a worse day than me because he is very, very bad at math. He is the one on the right, in case you were wondering. 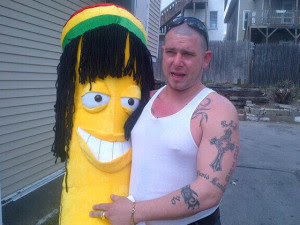 He went to a carnival and played one of the games because he wanted to win an X-box Kinect, which you should know that Microsoft sells for $299.99. Mr. Gamer, spent $300 trying to win the prize by tossing balls into a tub. After losing all his money, he went home and got $2300 more which he also lost. The next day, he went back and demanded a refund and they gave him $600 and a giant banana, which to borrow from Dave Barry would make an awesome title for a book. So, if my calculator is correct, he spent $2000 total trying to win a prize that he could buy himself for $300. And he is angry enough about it that he called the police and went on the news. So thank you, Mr. Gamer, for reminding me just how important knowing the basics of personal finance is, and for making me grateful that I learned very young that carnival games are rigged. I do like the giant banana, though. Now go back to school and do your math homework this time.