Bad Day 315--How about an award for worst cold?

My cold won't go away. It is just lingering and lingering. It's like it's found a home and it doesn't want to leave. I may never be well again. And before Artemis or Sister 2 suggests it, no I'm not leaking brain fluid. Unless brain fluid is green and icky. Yuck.

But it is awards season at the Department which means that I will have extra time to work because why go to the ceremonies when you are never, ever nominated for an award? I never am. Not ever. Not even when I evacuated people from a disaster zone. Nope. Not that I deserved one this year, because I'm pretty sure there is not an award for best make-up job after crying at your desk. Or one for number of sick days missed to take care of your children. I am really good at doing the things you are supposed to do every day for your job, but since I can't go off and do the exciting things (because someone else is already in Afghanistan and I can't leave the children unattended,) I won't be nominated for any awards this year. I spent a good part of the afternoon feeling grumpy and unappreciated. I mean, no one even noticed my awesome shoes today! And a total of two people noticed my hair cut and I had about 8 inches chopped off, so it's pretty noticeable. But that is the kind of office I have, so I decided to award myself some new shoes. I bought these. They are navy if you can't tell. Because, um, I already have a black and white polka dotted pair, but those are sandals with bows and are completely different. Also, these were on sale and really, really cheap.

Way better than some dumb certificate that comes with a monetary reward and helps you get promoted, right? If only they had an award for best shoes. Or one for best complaining about your children in a blog--I think I would totally have a shot at that one!

Speaking of new shoes, there is a homeless guy whom I see regularly on my way to and from the Department who was wearing some shiny new dress shoes today. The other week, I found $20 literally in the gutter icky and dirty and I picked it up vowing to give it to the first person I saw begging. So I saw him and I gave him the money and I wondered today if the new shoes was what my $20 had helped purchase. And then I really hoped so because everyone should have a nice new pair of shoes once in a while. I used to think that being poor meant you should only spend your money on essentials like food and shelter. But now, I think a little luxury now and then is a good thing. Plus I really understand the joy a new pair of shoes can bring, so I hope that is what the money I found bought him.

My friend "Guido" sent me a link to an article about this 10 year old girl in Utah who is having a worse day than me. She was apparently bullying another girl at her school and making fun of her clothes, so her stepmother went to the thrift store and bought her a weeks' worth of new outfits to wear and then made her wear them. And boy, did she find some ugly stuff. I have been to thrift stores in Utah, and I can safely say that they are terrible. I mean awful. No vintage because vintage in Utah gets snapped up at the garage sales people hold before things get donated to the thrift store--these are home-made rejects that even people who had lost everything but the clothes on their back would think twice about wearing. The cutest of the thrift store outfits was this mu-mu. 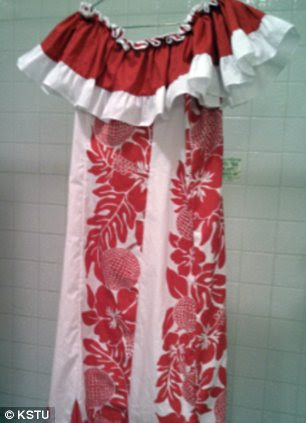 Poor girl. But she says she learned her lesson and maybe, some empathy for the girl she was bullying sunk in there because I'm certain that's what her mom was trying to do. So thank you, Utah Mom, for teaching your daughter to appreciate what she has, and for making me grateful that my own children have a great deal of empathy. And also thank you for giving me great fodder for the next time they complain they have nothing to wear. I can always threaten to buy things for them at the thrift store next time we go to Utah.
Posted by Jen at 9:33 PM