You know how sometimes you try something on and it immediately makes you look taller and thinner and you know if you just bought that shirt/dress/skirt/pair of shoes you could go out and conquer the world? Yeah, me neither but I hear it's a great feeling. Still, today I wore my new shirt from that British Designer Who Shall Not Be Named and it makes my hair redder and my eyes bluer and it fits like a dream and my friend at work who is probably the sexiest woman I know in real life told me I looked hot and asked where I got the shirt, so I know I looked good. And I was wearing my new sandals and they do actually make me about 3 inches taller. So it was a good day. Which means that something is going to go very wrong, very soon.

You see, I feel like the other shoe is about to drop. Yes, I know I say that all the time, but that is because I've had a lot of shoes dropped on me. 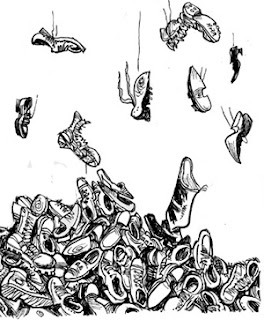 I have proof. Remember on day 266 when I said that it wasn't that bad of a day and then the very next day the Taliban tried to blow up Husband? No, it's OK if you don't believe me because I have more. I was really happy when we moved into our own house in DC and I loved my job and it was my dream job and I would hum all the way to work--and then Husband decided to go to Afghanistan. Still don't believe me? Well, in China, I really started liking my job and we had great friends and we were excited for the future--and then I found out I had cancer. (OK. I didn't actually have cancer but the doctors told me I did so it felt like a shoe dropped and then we moved to our next post where I had the Evil Boss so that was actually very bad. Did I ever tell that story about the not having cancer when they said I did and having a broken ankle when they said I didn't? I hate those doctors.) There are more, but that should be enough for now.

It is scary to be happy and optimistic when you are a pessimist. So since today was such a great day and included dinner with Artemis at a restaurant with delicious food and a gluten-free menu and another viewing of Star Trek: Into Darkness because Artemis hadn't seen it yet, then something bad needs to happen to even it out because the universe apparently cannot stand for me to be happy. Quick--somebody get a hangnail or burn some cookies or forget your homework or something before I get too happy and then the shoe that's coming smacks me in the head. Husband, Afghanistan is making me even more superstitious so you'd better come home right away. I so wish. Sigh.

This family in Virginia is having a worse day than me. And yes, that is a plane the crane is removing from their apartment.

The guy who lives in the apartment with his family said he was woken up by a loud noise and was surprised to find an airplane in his living room with two people crawling out of it. I'm not sure that the word "surprised" actually covers it. (I don't think there is a word in English that would describe how I would feel if I woke up and found a plane crashed into my house.) The pilot was seriously injured and is in the hospital, but everyone else including the passenger is OK, although the apartment is probably not habitable at the moment given that there is a plane-sized hole in it. So thank you, Mr. Surprised, for reminding me to be grateful that we do not live at the end of a runway, although there are lots of airports nearby. Should I be worried? Maybe it's not another shoe that will drop but an airplane. I really, really hope that is not the bad thing that happens. Couldn't I just get non-cancer again instead?