So last night I ran the de-lousing comb through Child 3's hair and found some tiny, tiny nits which apparently means the eggs have hatched and it is time for the next and hopefully last de-lousing treatment before the buggers get big enough to lay any eggs. I have coated Child 3's very long luxurious hair in about as much de-lousing shampoo as should be legally allowed. I can smell her from here and she is two rooms away. I don't know how she can stand it, but I am carefully watching the clock, and in a few minutes, she will go rinse it all out and hopefully most of the bugs with it. I hate lice. I so hate lice that I am constantly itchy because I am certain that she has given them to me even though we have been super careful. I am just praying that this works.

So four days until my life in bondage is over. No, I'm not in jail and I'm not locked in my house. I'm talking about the end of this election season and the stupid phone calls that I receive every. single. day. I have been told to vote countless times. I have been asked if I received my absentee ballot countless times. I have been asked who I'm voting for countless times. Last night, I told the pollster I was voting for the Green Party. I'm not even sure if there is a Green Party candidate in this election, but I am so sick of pollsters and campaigners that now I just lie as a matter of course to mess with them. It's a nuisance and there seriously ought to be a law that says you cannot call any more than once a week. Four times a day is just way, way too much. 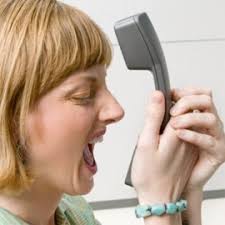 So my friend "Sparrow" sent me a link about this restaurant server who is having a worse day than me. A customer got a bill for $140 and instead of leaving a tip, said that she was sorry and was a single mom. 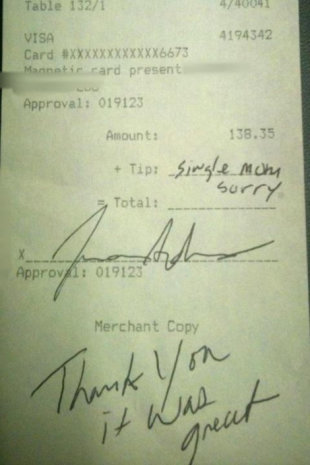 I have to say that was incredibly mean and petty because if you can afford dinner at a restaurant where it costs $140, then you should be able to afford the tip. And if you know you can't, then choose a cheaper restaurant! Wait staff make less than $3/hour which isn't nearly enough for what they put up with. So stingy single mom, thanks for giving us all a bad name! And thanks for making me feel grateful that I'm not dumb enough to eat dinner at restaurants that I can't afford. It's why we have the cheap Chinese place down the street on speed dial. Get a clue and try the $1 menu at McDonald's next time.