Bad Day 143--They were the footprints of a giant hound!

We're watching the new Sherlock (the BBC version. I haven't seen the CBS one.) 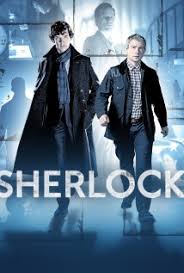 And we're eating Pirate's Booty which is puffy and cheesy and apparently gluten-free. If I actually had celiac disease, it might be a good substitute for Cheetos. I'm watching Sherlock to unwind after a very hectic day of running around trying to find the answers to very obscure questions that people called me to ask about because they thought I might know the answer. I must give off an aura of competency at work because I would never have thought to ask me so many questions. I know Child 2 thinks I know the answer to everything, but I really don't. I just know a lot more than Child 2. Someday, she will know more than me and all her illusions will be shattered.

Child 1 is snuggling with The Dog who refuses to get off my bed or leave my room. I think I mentioned before that she figured out how to open my door while it's still locked so there is no point in even shutting the door anymore. I honestly don't see why I'm so fascinating to her. The children bathe her, feed her, groom her, and walk her most of the time. I walk her once a day and spend the rest of the time ignoring her and telling her to get off the bed, yet it's me she loves. Luuuuvs me. Can't get enough of me. Must. be. near. me. All the time. It's so annoying. She's like that boy who liked me in high school and followed me around all the time and I couldn't stand him but nothing, nothing would convince him that I would never, ever like him. The only way I got rid of him was I moved away to college. Maybe that's what I should do. I should move so that The Dog can't find me. I don't want to get rid of the children, though and I don't think they'd leave The Dog behind. So I guess I'm not moving to Australia in my rail road train pajamas. (Seriously, has no one outside my family ever read that book?)

This man in Indiana is having a worse day than me. You can see why by this photo. 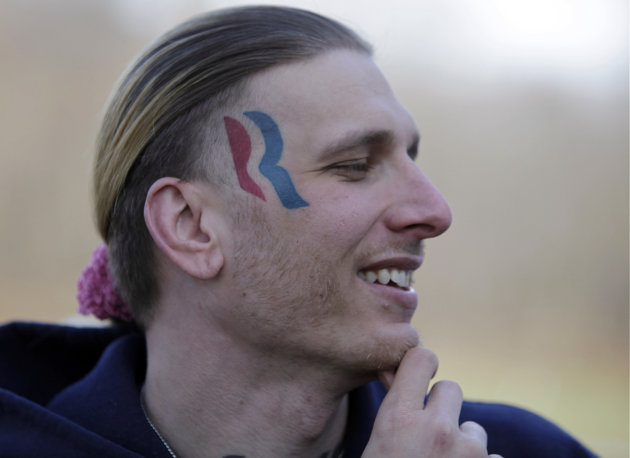 No, I am not mocking his choice of candidates because this is more important than politics. I am totally making fun of the fact that not only was he dumb enough to tattoo his face, he is wearing a pink scrunchie. In public. Apparently on purpose. So thank you, Mr. Dumb Tattoo, for reminding me to be proud that I haven't worn a scrunchie since 1995. Pink scrunchies are for little girls, and you sir, are no little girl. I can tell by the facial hair.
Posted by Jen at 8:47 PM