I am sitting next to Child 3 watching her not do her math homework and it is extremely frustrating. I know she wants me to give her the answers, but I already passed 5th grade math and I have no desire to go back to middle school again. So she's just going to have to figure it out on her own. Just like I'm going to have to fold the laundry all on my own because there is no one else in the house who knows how to do it. I'm just surmising here based on the fact that none of the children ever fold anything and put it in a drawer. Worn clothes go directly to the floor rather than in a hamper or neatly put away. Child 1 has so many on her floor that you cannot open the door to her room. If Gov. Christie saw Child 2 & 3's shared room, he would declare it a disaster area and swear that a hurricane had passed through. But I'm too tired to do anything about it so they will just have to keep complaining that they have nothing to wear and I will keep telling them to look on the floor of their room. This is not their room. You can tell because you can still see part of the floor.

On a happy note, Child 1 cooked dinner tonight, so that was a help. I also have even more prescriptions after a visit to the doctor. I think that my blood is now mostly prescription medicine with a couple of red cells thrown in. And I wonder if in the long run, I will be worse off from taking 6, yes six, different things daily, some of them twice a day. It's getting a little hard to keep track of them all. I thought about maybe getting one of those daily pill separators, but Child 1 says that would make me look like an old person. I am old, but maybe not that old, so I'll just keep trying to remember what I took when. Ugh. I'm so over this whole being sick thing. If only I would get better!

This baby girl is having a worse day than me. 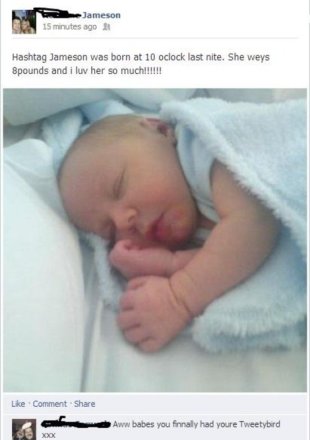 Yep, her name is Hashtag. As in #worstgirlnameever! I have often wished that my parents had come up with a more original name because mine is rather popular. But please! What is she going to do in 20 years when nobody remembers what Twitter is anymore? Probably change her name, which is what I would do if I were her. So thank you, clueless parents, for reminding me that although some of the children's names are also more popular than we would like, at least I didn't name them "WordPerfect" or "Windows 97" or some other lame 90s technology. Good luck, Hashtag! I hope fate is kinder to you than your parents were.