I am so tired. Too tired to change the channel from this reality show which is horrifying and fascinating me at the same time. So I'll just blog instead.

Two of the children are sick. Well, actually, one is really sick and has a fever and I know she's not faking because she had no idea about the fever until she came to me and said she had a headache and she was burning up. The other is faking, I'm pretty certain because her symptoms are quite vague. I am the type of parent who would rather err on the side of caution and not send a child to school who might actually be sick. The problem is that they all know that and two of them take advantage of that fact. The other feels guilty when she doesn't go to school when she actually is sick and I have to force her to stay home. (Yes, she's that kid, but she's delightful so don't judge.) So now I have to decide if I should let the obvious faker cry wolf and stay home, or should I force her to get up and go. I guess it will all depend on how I feel at 5:30 am tomorrow when it is actually time to fight the get up and get your clothes on and get to the bus or I will lose it battle. I imagine, given the way I feel tonight, that I might not have enough energy to force the issue. I'll let you know. 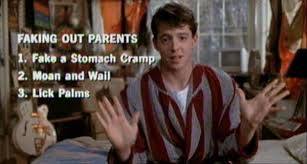 Sorry, Ferris. I think your parents actually knew, they just were too tired to fight it and since you weren't failing any classes, they didn't care.

Fabulous Niece 1 returned home today and we will miss her. The girls had a lot of fun with her and it was nice to see her because we don't get to nearly often enough, and since she really does live on the opposite side of the country, she does have an excuse.

Since I have to finish watching this horrible reality show which I shouldn't watch but can't stop watching the train wreck, I'll get right to the bad days. This family in Texas is having a worse day than me. They have been arrested as a family for armed robbery, in part because of their bad fashion sense. Somebody recognized their ugly orange vests when they robbed a Home Depot and now they will probably get to wear a lot of orange in the future because that is the color of choice for prison uniforms. So thank you, family robbers, for reminding me that there are lots of other things we can do for family activities and being arrested isn't my idea of togetherness.