Today I went to lunch with my mission president. I have mentioned before that I was a missionary for my church in Norway and the man who was in charge of all the missionaries when I was there was visiting DC and asked me out to lunch. It was lovely to see him again. I don't think I've seen him since I ran into him, almost literally, on the steps of the theater in Shanghai--which was a total trip. It's a very small world, sometimes. He is well, having recovered fully from a battle with very aggressive prostate cancer, although thinner than I remember which may be because of the cancer fight.

We went to a lovely restaurant and I ate half a bowl of onion soup and three slices of baguette with "heirloom tomato salad" which really was a few tablespoons of chopped red and yellow tomatoes with some olive oil and a little feta thrown in. It was delicious and if I were my normal self, I would have been famished. But since I now can't eat more than a toddler, it was perfect. I'm trying to look on the bright side which is that I'm never hungry and I will be the only person I know to lose weight over the holidays. That is, if I can stop sneaking chocolate.

You see, the worst of the chocolate allergy besides the itchy hives on my face is that it makes me sick to my stomach. But since I'm already sick to my stomach, I figured what harm could it do? Except I forgot how awful the hives are and I have had to wear a lot of make-up to cover them up and they are also itchy which is harder to stop. So I think maybe I will give up the chocolate. Also, for some reason, chocolate doesn't sound appealing when you are nauseous all the time. Believe me, this is a new thing for me. I have never not wanted chocolate. I always subscribed to the more chocolate is better rule which I inherited from my grandma whom I once went to a restaurant with and the waiter asked if she wanted to try a dessert and she said yes, she would like to die by chocolate because she thought that was the way to go.

Her favorite candy was Mounds and I used to buy them and eat them and think of her, just like tacos from Jack in the Box remind me of my grandpa. So in some way, I feel like I'm betraying my grandma by not eating chocolate. She would have said just to take Benadryl and wear make-up. So, I'm sorry, Grandma. I'll just have to learn to make your red cabbage instead. I hope you can forgive me. Maybe someday I'll visit the Long Island Medium and ask her to ask you if you're OK with me not eating chocolate. (Seriously, have you seen that show on TLC? It really looks like she talks to the dead.) Or maybe I'll just go to sleep and dream. Once, after my other grandfather had passed away, I dreamed he came to me and told me to buy some stocks, which if you knew him, you would know that is exactly the kind of message he would give from beyond the grave. Sister 1 told me to go back to sleep and ask him which ones. I still sometimes dream that my grandparents come to visit, so maybe next time I'll ask about the chocolate.

This boy in Texas is having a worse day than me. He got an awesome haircut that showcased his favorite football player from Texas A&M. Here is a picture. 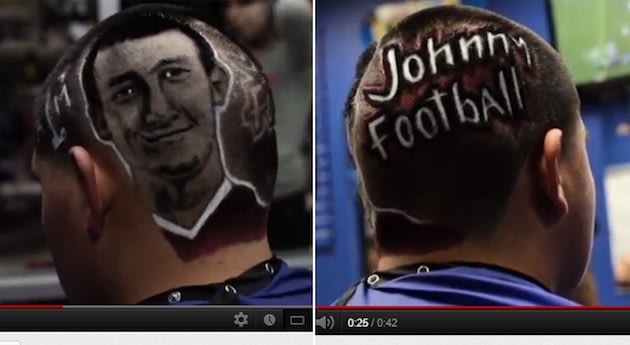 His high school, however, didn't appreciate it and sent him home until he could get rid of it. We Texans love our football, but schools there also have very strict dress codes. He really should have known better. But thank you, Aggie fan, for reminding me to be grateful that I have daughters and that we will never have to deal with hair issues like this.