Bad Day 188--Bring home the bacon, fry it up in the microwave.

Today started out disastrously and ended up not as bad as it could have been, so that's an improvement, I guess. First, I hardly slept at all last night and I was a zombie in the morning with a migraine. I thought maybe I would just go back to sleep, but the children were having a really hard time, so I had to get up and get them going. I took the really strong migraine medicine which makes me spacey, but I still got the children out the door and made it to work on time even though I got out of bed 45 minutes late.

Then, I made it through the entire day of work without falling asleep at my desk which I really thought would happen given that I was sleepless on migraine meds. Then I came home, made dinner, (which included microwaved bacon. I wasn't awake enough to actually fry the bacon,) and then I still felt peppy enough to clean up afterward. If you knew how poorly I was feeling before Halloween, then you know what a big deal that is to make it the whole day without doubling over in pain and crawling back into bed. So yippee for gluten-free! I'm convinced that is what is making the difference because I even ate chocolate yesterday and I still made it through the day today. I do have a couple of itchy hives, though. I have to stop pretending that I can eat chocolate.

OK, so we have to talk about the Golden Globes which I missed because I was helping with homework and Skyping with my parents and Husband. I am so excited that not only did Argo win, but Ben Affleck gave a shout out to the Foreign Service which I watched on Youtube. I love the internet. And Tony Mendez, my close personal friend, (OK, I just stalk him but still, I've met him twice!) got to attend! I hope he and  his wife Jonna, who was also there, enjoyed every minute of the show. They definitely had a better day than me. Tony is the one on the left, just in case you lived in a cave until yesterday and don't recognize John Goodman who is also one of my favorite actors, besides Ben Affleck who had the good sense to marry someone named Jennifer. 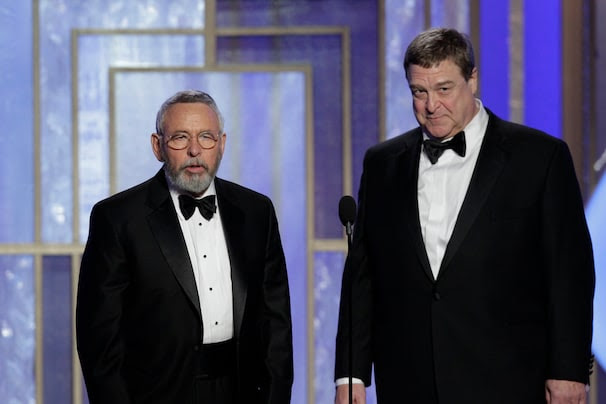 This teacher in Ohio is having a worse day than me. She is suing her school board for discrimination because she has a disability which is that she has a phobia of small children. She originally taught high school, but she was moved down to the middle school so she resigned. First of all, why would you choose teaching as a profession if you are afraid of children? And second, I don't know if you've been to a middle school lately, but the children there are not all that small. Some of them are taller than me, so I'm not sure why she had to resign. But in any case, she is now jobless and in the middle of a lawsuit that makes her the subject of ridicule. So thank you, Ms. Phobia, for reminding me to be grateful that I love my middle-schooler. Child 3 can yell with the best of them, but she's not all that scary. Much more on the adorable side. All of the children are delightful. The Dog, on the other hand, now she's scary.
Posted by Jen at 10:18 PM