I am having movie night by myself. I am supposed to be watching a movie with the children, but they are upstairs playing on the Wii completely oblivious to the fact that they ditched me for Go Vacation or whatever it's called. So I'm watching Seven Brides for Seven Brothers all alone. This is not the kind of movie that's meant to be watched alone. It's meant to be watched with someone who knows all the words and can laugh at the terrible dialogue and love the dancing scenes. It's an absurd movie and more misogynistic than I had remembered. But I still love it.

My sisters and I used to watch it together. We loved it so much, that Sister 2 and I made up a ficticious character based on one of the lines in the movie. Years ago, when I was still single, if someone asked for my name and I didn't want to give it to them, I would occasionally say my name was Martha Ruth. Martha Ruth Smith, to be exact. If you don't get the Martha Ruth reference, you should know that in the movie, someone says "Eliza, Martha, Ruth! Fetch some blankets!" And sister 2 thought Martha Ruth was one person and that was a terrible name to give a child. So then that was the name we used. Along with Bertha Martha Schwartzenheimer, which I'm pretty sure gave the hint that I wasn't interested.

I have a pile of laundry the size of Mt. Vesuvius on my bed, so I'd better get to work. The children refuse to fold any of it, so I think I'm just going to throw it on the floor of their rooms, which is where it would end up anyway, so what's the point of folding it at all?

This gem wholesaler from New Jersey is having a worse day than me. He left a bag of diamonds in his rental car at a restaurant in Florida for about 15 minutes and when he came out to get them the bag was gone, and so were $400,000 worth of diamonds. 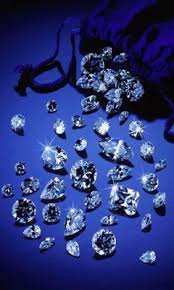 I have never had $400,000 worth of anything in my possession ever, but you can be sure if I did, I wouldn't leave it in plain sight on the seat of a rental car. He must have been really hungry or really had to use the restroom, or really insured because that was a pretty careless thing to do. So thank you, Mr. Hungry Wholesaler, for reminding me to be grateful that all the diamonds I own fit on one finger, and that finger goes with me everywhere, even to fold the laundry.
Posted by Jen at 11:06 PM