We had Korean food for dinner. We made it ourselves with gluten-free soy sauce. The children are very fond of Koran food and I am fond of some of it, so we made bulgogi, which when I loived in Korea the first time was spelled "pulkogi" and literally means "fire meat" but isn't spicy and is called that because you are supposed to cook it over a fire, but we only have a gas stove so we stir fried it. It was still really good, and the zucchini fritters that Child 1 made were even better.

Today was actually a pretty good day. The well-meaning people mostly left me alone at church and they were replaced by people who actually meant me well. They were kind, and considerate and funny. One friend found some candy without gluten and brought it for me to try. She's also experimenting with wheat-free sourdough starters which is amazing to me that she would go to all that trouble. And I haven't started sobbing for no reason in weeks, so I think I've finally reached some sort of equilibrium. Of course, that means that something horrible will happen now because that is the kind of luck I have.

We're watching Star Trek III: The Search for Spock. I told the children that only the even movies were good, but they insisted, so we're watching and Child 3 is completely confused and I don't blame her. Also, the fight scenes are horrible. It's very old school and in slow motion and the graphics are the worst ever, but it's Star Trek so we are still watching. After this is over, I'll need to watch something else to recover because I just can't take any more of this awful movie. Child 1 is now angry at me for insulting Star Trek. OK, and I admit that when Spock remembers Jim, that is a pretty happy scene. (Oh, spoiler alert!)

This kindergartner in Pennsylvania is having a worse day than me. She was suspended for 10 days for making terrorist threats against her class by suggesting that they shoot each other with this weapon: 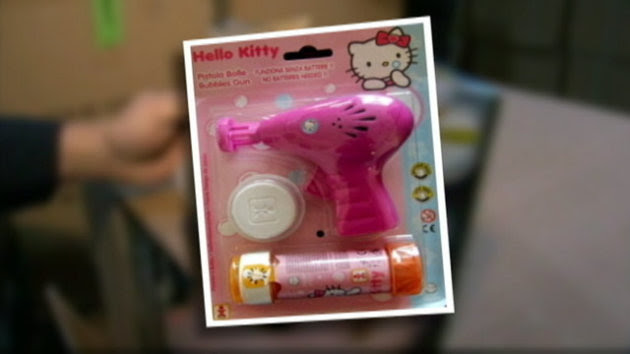 Yes. You got that right. She was suspended for threats she made regarding shooting bubbles with a Hello Kitty bubble gun that she didn't even have in her possession at the time. I am really confused as to why the school thought that bubbles were threatening, unless they have some fear of soap in which case I would not want to attend that school. The family is fighting to get the suspension removed from their daughter's record because really, who wants a "terrorist threat" they made in kindergarten to follow them around for the rest of their lives. And also, bubbles aren't threatening! So thank you, sweet kindergartner  for reminding me how much I loved blowing bubbles with my children when they were your age. Little girl giggles and tiny fingers trying to catch bubbles are some of my favorite memories. And if you ever visit my town, I would be happy to have a bubble fight with you and I won't be afraid at at all. The Dog doesn't like Hello Kitty, though, so we'll have to get new ones. Maybe they make Star Trek bubble guns that look like phasers. Now that would be cool!