Today was a bad day. I spent the morning reading traffic about the murders of my colleagues in Libya and listening to the Secretary and the President speak eloquently about their sacrifice. Then I spent a lot of time in my office crying. These deaths were very personal to me. Not because I knew any of them personally, although the Foreign Service is small and there were three people in my office who had worked with Chris Stevens, and one who played online games with Sean Smith. But the real reason is that if there are going to be widespread riots over this stupid film that an idiot in California made that no one in America ever saw, then you can bet that riots in Afghanistan will begin shortly. And that makes it so very personal to me.

I was feeling pretty down and ready to just give up on diplomacy altogether. I mean, why are we even trying if people don't want us there. And then I saw this picture. 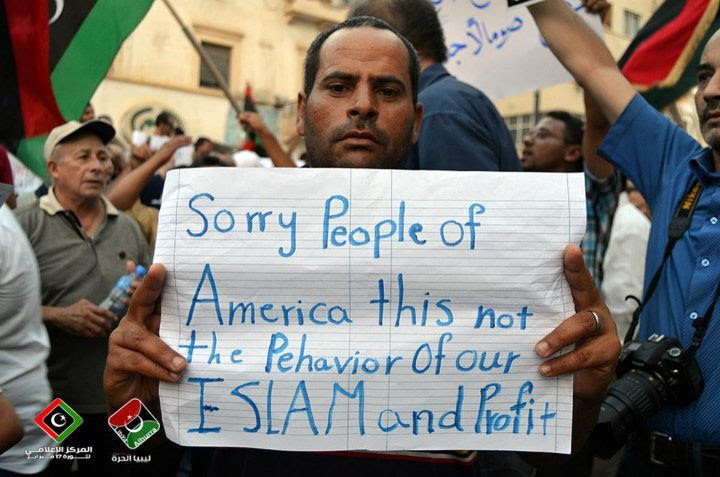 There are some people in Libya who are genuinely distressed that their fellow countrymen killed an ambassador who really had the best interest of the Libyan people at heart. And maybe, in this case, some of them will be inspired to work together for change so that this kind of thing will become a faint memory. That is my hope and that is exactly why Husband went to Afghanistan.

So I'm sorry for not being funny today. I'll try again tomorrow.