Bad Day 79--My children are from Mars

I went on strike again. I had a very long day at work sending e-mails begging people to give me a job. I know you're all dying to know where we're going next, but I assure you not as much as I am. I still don't know, but I hope to find out soon, which in Department time means sometime in the next year. I hate Department time. Anyway, I spent all day begging people to give me a job except for the part where I had to make a PowerPoint presentation on the history of my bureau AND make it sound interesting, which I was accomplishing until the fire drill and I had to evacuate the building after locking everything up. So it was that kind of day. And then I came home to find my children had been replaced by aliens. 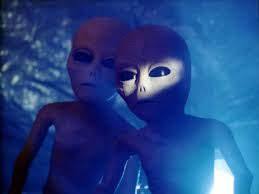 Here is how I know they are aliens. I came home after a long, hot, tiring day to find that the dishes had not been done even though I had asked them two days in a row to do them. It was definitely my children who did not to the dishes. So instead of making dinner, I went upstairs and played on my computer and told them there would be no dinner until the dishes were done. And sometime in between not doing the dishes and me going on strike, the aliens arrived and took over my children because not only did they do the dishes without whining and complaining, they made dinner. Without my asking!

OK, I had to help a little because there was a tiny grilled-cheese sandwich disaster. But still, they planned the whole thing and it was very sweet and yummy because who doesn't love grilled cheese sandwiches with creamy tomato soup? So kind aliens, could you please keep taking over the children when it's time for chores? I'd like them normal when we go to the movies or are playing a game, but if you could keep them helping out in the kitchen, I promise I'll not only take you to my leader, I'll sing your praises.

Husband finally found a way to Skype again tonight. He is growing a beard. Child 2 not only doesn't approve, she insists that it be shaved before he comes home again. She mentions it every single time she sees him. You go Child 2! The beard is itchy. I'm not a fan. But this brings up the question, if Husband can grow a beard while he's away, what can I do that he never liked? I'd volunteer to stop shaving my leg,s but that's icky, and also hard to see over Skype and find annoying. So I'm open to suggestions. Most of the things that annoy him you can't see on Skype, like using the parking brake (which you are totally supposed to always do) and making corned beef and cabbage. So I'll have to consult with the aliens  children and come up with an appropriate plan. Stay tuned.

My friend Bobbi who lives surrounded by evil British fashion designers who are out to get me came through again with someone who is having a worse day than me. It is this woman who is a Cook County Illinois prosecutor. Apparently, she and her friend had too much to drink and caused a disturbance in an adult lingerie store. When the clerk objected, she showed him her badge, and then bit him. And then got arrested. This may have been a career ending mistake, because even if she keeps her job, every defense attorney will now use the line "bite me" against her and everyone in the courtroom will laugh. Hard to be very credible after that. So thank you, clueless prosecutor, for reminding me to keep my teeth to myself and to be grateful that I will never, ever be that drunk or that stupid.