Ohhhh, The Dog was in fine form today. So fine that she almost severed my finger. No, she didn't bite me. She hasn't bitten anyone--yet. But she did lunge at the maid while I was holding the leash and it's one of those retractable ones and my finger got caught and I have a really bad rope burn and it hurts a lot. I put about half a tube of Neosporin on it and I have a big bandage, but I'm afraid to use it much because it really hurts. And of course The Dog did not apologize and then she chewed through the leash so I had to buy a new one. Not her finest moment. Oh, and that was after she broke a stool and licked the carpet until it was sopping wet. Why on earth does she lick the carpet? Seriously, there are two unforgivable things Husband has done in our marriage: 1. Leaving for Afghanistan. 2. Leaving me with The Dog! Which I never wanted in the first place. Good thing she's cute or I wouldn't give her a million second chances.

I'm watching Julie & Julia which is one of my favorite movies. Julia Child was married to a Foreign Service Officer and she took up cooking because she wanted something to do while her husband was working and back then, women were not allowed to be in the Foreign Service if they were married. I know! So very unfair. Since Julia had a government job and had to give it up to get married. And your husband's yearly evaluation had your performance in it as a spouse. Like "Mrs. John Smith has not entertained as often as she might. Her last dinner party was woefully under attended and the food was late and dry." Yes, your husband's promotion could be at risk because you overcooked the roast. Husband wouldn't have to worry about my cooking on his evaluation, but I'm glad things have changed. I would hate wearing white gloves, although I must say that I look awesome in hats.

But I supposed that we should thank the Department of State for its previously sexist policy of firing women who got married, because then we might not have had Julia Child and her marvelous books and shows if she could have kept her job. From pain and difficulty can come greatness. Nora Ephron, who wrote the screenplay for Julie & Julia and whom I've mentioned is one of my idols, wrote her best book Heartburn after her husband Carl Bernstein fell in love with someone else and cheated on her. Husband thinks he should get credit for this blog, not that it's anything close to what Nora or Julia ever wrote, but he still thinks it's all due to him that I started it. That is true that his leaving for Afghanistan caused the pain that gave me the idea to start the blog, so Husband if you want to be considered in the same class with a sexist department or a cheating jerk, be my guest. :-)

All things considered, I would rather have never had a reason to write the blog, because then Husband wouldn't be in Afghanistan and I wouldn't watch the news every night holding my breath.

My friend "Betsy" in Taiwan told me about this woman in England  who is having a worse day than me. She got very drunk, took some kind of hallucinogen, and then stole a ferry boat and took it for a joy ride, all the while screaming to the police that she was Captain Jack Sparrow. This is her picture.

This is Captain Jack Sparrow's. 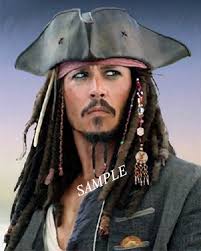 His hair is definitely better. And she's now in jail with probably the worst hangover ever. So thank you, pirate lady, for reminding me that ferry rides are for paying customers and to always check my makeup before taking a photo, even if it's only for a mug-shot.
Posted by Jen at 9:02 PM