Bad Day 265--Not how you normally think of Helen Keller

100 days left and they couldn't be over soon enough. Husband and I have Child 3's cold which I didn't think was possible because I thought she got mine. But apparently, this one belonged to the woman who sat next to us on the flight to London and coughed the entire way. I sat between the coughing Russian girl (who showed up way late and held up the plane and still coughed on me) and Child 3, but I didn't get sick first. Husband sounds awful and I feel pretty miserable. The cold medicine along with the jet lag almost made me pull a Husband and fall asleep during a meeting, but I dug my fingernails into my palm to keep myself awake so no one threw anything. Husband probably feels even worse because he doesn't have any of the magic Alleve-D which really does work for 12 hours. I told him to take some to Afghanistan, but no, he said, he never gets sick so he didn't need them. So I am happily using them to keep my symptoms at bay.

So Child 3 finished her report on Helen Keller last night, but she didn't let me see it before she turned it in and it has a very interesting description of life on Vaudeville which apparently included strippers. Yes. You read that right. My child turned in a report that associates Helen Keller, a venerated supporter of rights for the disabled and an amazingly accomplished woman, with strippers. But she really did go on the Vaudeville circuit on which there really were strippers in Vaudeville, so Child 3 wasn't inaccurate. After I stopped crying because I was laughing so hard, I wrote her teacher to warn her. I didn't want her to get in trouble for being, um,  inappropriate. Here is a picture of Helen Keller reading in Braille. Notice the lack of anything burlesque about her. 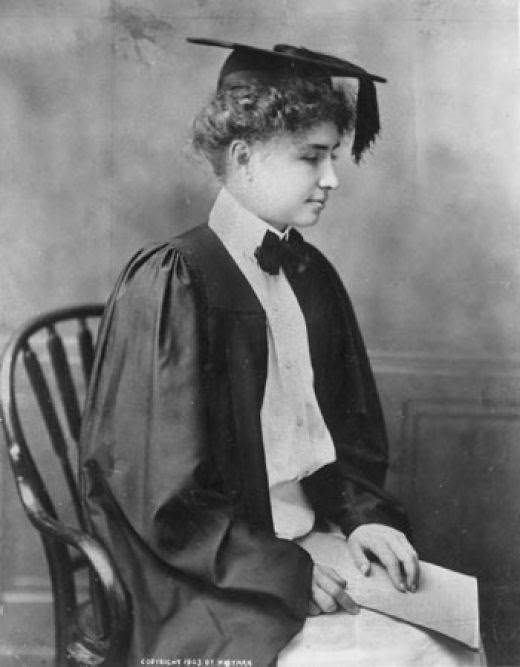 Someone from the Department who reads this blog wrote me today to remind me that Louisville basketball guard Kevin Ware is having a worse day than me, and she is right. He totally is. 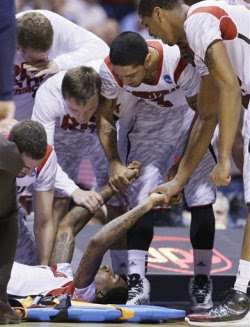 Kevin was playing in the regional championship game against Duke when he came down hard after challenging a 3-pointer and his lower leg just snapped. Everyone was horrified, especially his teammates who were crying and obviously upset for their injured friend. Kevin told them to just go on and win, and they did, but he won't get to play in the Final Four. So thank you, Mr. Ware, for reminding me to be grateful that as many bones as I've broken, none of them have been compound fractures and none were on a basketball court. Your courage and grace under pressure are already legendary, and although I'm not a Louisville fan, I will be routing for them this weekend. Go Cardinals!
Posted by Jen at 8:07 PM