So on day four of the migraine war, I managed to get to work and get enough medicine in me that I could mostly function, sort of. I couldn't remember my own name, but I have an automatic signature in my e-mails, so that worked out OK. I think I lost an hour or two in there somewhere because it felt like all of a sudden I looked up and it was 4:30 which means time to actually send the thousands of e-mails I was composing. OK, not thousands. That was my last job in which I supervised a team that answered about a thousand e-mails daily. So maybe dozens today. I also had a nice chat with Husband on the phone about people using your picture on their websites without your permission. This has actually happened to us twice--both times by government agencies. First, about 6 years ago, the immigration service used a photo of Child 3 without our permission. It had been taken while we were on the Mall and she was wearing a cute 4th of July dress. I was shocked to see her on the immigration web site. More recently, another government agency whom Husband has never worked for posted a picture of him on their recruitment page. Again, they didn't ask for permission or he might have suggested they actually use a picture of one of their own employees. Still, that is fun for me to look at the picture of him, especially because I think he is asleep in it. I have it bookmarked.

Mom is still here, which is a blessing because tonight I forgot that Child 2 was starting clarinet lessons, so I had to rush to get dinner on the table and then leave to take her to her lesson. So when I got home, Mom had put all the food away, which was awesome because the children would have just left it on the table for The Dog to eat and she would have thrown it up all over my bedroom. The Dog likes Mom a lot and follows her around like one of the family.

Then, I got a package in the mail that said it was a present for me, which turned out to be maple sugar candy from Sister 2 which was awesome! Because I love maple sugar candy almost as much as I love chocolate and it has no wheat. Mom said to be sure to check the ingredients which I did and this was them in total "pure maple syrup." So we all had some and let it melt in our mouths and it was sugary and luscious and every bit as good as I remembered. That made my day. I love you, Sister 2!

Someone else left chocolate chip cookies on our doorstep, although we suspect it is the girl whom Child 2 left brownies on the doorstep for last week. Anyway, two of us ate all the cookies because there weren't very many and two of us can't have wheat, one of us (guess who?) can't have chocolate, and Mom is allergic to eggs, so unless they were vegan cookies, she couldn't eat them. But again, it was a nice thought and Child 1 & 2 thoroughly enjoyed them and Child 3 was so happy she had maple sugar candy that she didn't care.

People in Florida are having a worse day than me because of the Giant African Snails. 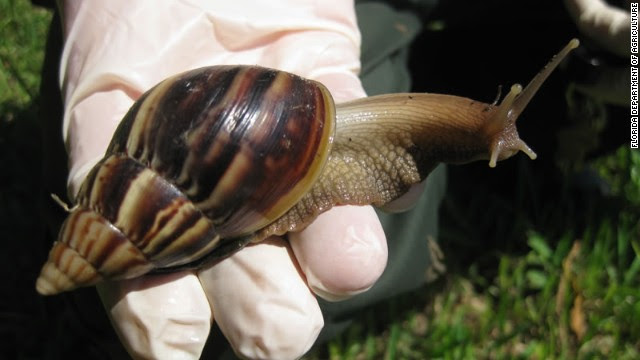 In case you can't tell, that snail is as big as his hand. They are pests and each one can lay 1,200 eggs, so they are tough to eradicate and they are taking over Miami--they have killed over 114,000 so far. Besides eating everything in their path, their slime gets all over everything and their shells can puncture a tire. I used to think it might be nice to retire in Florida, but with all the giant mosquitoes and snails, I'm scared. Snails don't normally bother me, but then they aren't usually as big as my head. So thank you, Floridians, for reminding me that it is too cold for giant snails where I live. Also, The Dog would never let them in our yard. At least she is good for something.
Posted by Jen at 9:37 PM