The fact that I am still on my feet after this weekend is surprising. Artemis says it's a triumph and I agree with her. Child 1 says I'm not on my feet because at the moment I am in my pajamas and sitting in bed. So technically, she is correct. (But she's also eating Thin Mints in front of me, so I'm a little miffed with her at the moment.) Still, I made it through today and I didn't fall apart once. In public, that is. In private, in my bedroom, I was a mess. Husband's Niece 2 is in town with her high school orchestra and we picked her up and took her to see her great-grandfather's grave in Arlington Cemetery and I didn't cry once, which for me is a record because I cry every single time I go to Arlington Cemetery ever since my first trip in 8th grade. Whoever doesn't get emotional at the sight of this has no soul, and I have mentioned before that I am rather patriotic (you know I have a rhinestone flag pin, so it gets me every time. 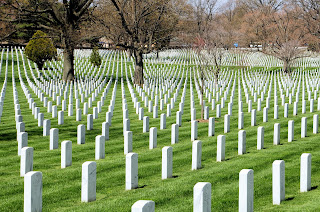 As a consequence, we don't go there very often. But today, I held it together until we got home and then I skyped with Husband and sobbed and sobbed. Thankfully, the girls were at a park in the warm, sunny weather, so they didn't see what a wreck I was. This has probably been the worst week I have ever had, and that includes the one when I lost the baby, and the one where I almost died from e-coli, and the ones when the stupid doctors in China told me I had cancer when I didn't. And the one when Husband left for Afghanistan the first time. That was an awful week, but this one was much, much worse. So if you ask me how I'm doing and I say I'm still alive, then I think that's pretty optimistic of me considering I would rather have e-coli again that go through another week like this one. And that e-coli thing was pretty nasty and I was in a third world country with really terrible health care, so that is saying a whole lot.

Brother is having a worse day than me. I know this because it is his birthday and he is somewhere dying in a ditch, unable to call for help. He must be because his birthday is a whole month after mine which he completely forgot to recognize in any way shape or form. So if he weren't lying in a ditch somewhere or lost in the jungle, or stranded on a deserted island because his plane went down and the island is enchanted and can jump through time and there is a polar bear there, then I would wish him a happy birthday. But since he is unable to communicate with the rest of the world, I am very sad for him. (Sister 1 contributed to this post, Brother. She says you haven't called her in years. Years!) But if for some reason you are able to communicate and feel very, very, awfully terrible that you forgot my birthday last month, and apology e-mail will do, or just a post on my blog. I still love you, Mr. Birthday Forgetter, and I am grateful that you are my brother.
Posted by Jen at 10:17 PM