Bad Day 287--How much wood would a wood truck truck?

Today was good until it wasn't. At work, I was recognized as an expert in my field, which always surprises me, and I won an inter-agency fight, which also surprised me but made me happy because I was so right. But then I came home to a bunch of people who think I am wrong about everything and I know nothing and my clothes are ugly. OK, the child who said that last one was 4 at the time and it still makes me laugh, but I am Rodney Dangerfield at home and I get no respect. I may have told this story before, but when I first went back to work I would come home at the same time as Husband and they would cheer, "Daddy's home!" and run and hug him. Then they would turn and yell at me, "you forgot my permission slip!" And there would be no hugs. Tonight, on the way home, I called Child 1 to have her start dinner because it was her night to cook. First she tried to screen my call, but I was persistent. Then she decided we should have Chipotle instead of cooking so I went with her to get pay for the food, and I completely forgot that Child 2 had clarinet lessons. Child 2 reminded me just when her lessons were supposed to be done, so it was too late. So now I am going to set an alarm on my phone so that next week, we don't blow it again and nobody had better yell at me that it's my fault because I am so tired of being in charge of everything.

To make myself feel better about blowing the lessons, we watched Hawaii-five-0 at dinner. You can tell that I'm rather obsessed with crime dramas set in Hawaii, mostly because I like to pretend that I am there. I may have mentioned before that I spent the best month of my life in Hawaii many years ago and I've been trying to get back there ever since. Can you see why?

I made it back once when we were in China, which was awesome because I was in training with some great friends. And we tried and tried to get there when we lived in Korea, but it never worked out, so we went to Guam instead which I think I loved almost as much. But today, on the episode of 5-0 that we watched, Hawaii was doubling for North Korea which just makes me crack up, because anyone who knows North Korea knows that it doesn't look like Waimea Bay, it looks much more like the Oklahoma dust bowl but with mountains. Here is an actual picture of North Korea.

See? Totally not like Hawaii in any way. At all. The reason there is smoke coming out of the truck is that it is burning wood for fuel. Yep, that's right. They don't have enough gasoline, so they use wood, which is probably one reason why there aren't so many trees. Also, since it's completely above the 38th parallel  that means the climate is a lot like Nebraska, which means there are no palm trees. So the next time you see a TV show or movie where they North Koreans are all scary and have awesome technology and things like airplanes that actually fly and it is green and lush, remember the wood-burning trucks and laugh along with me.

Reese Witherspoon is having a worse day than me. In case you can't tell, this is her mug shot. 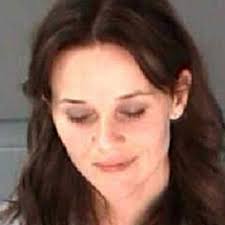 Not bad for being drunk and disorderly, is it? See, Ms. Witherspoon was drunk in a car with her husband when he was pulled over on suspicion of a DUI. And instead of being kind and polite to the officer who had every right to protect the rest of America from being killed by people too drunk to drive, she got out of the car and asked him if he knew who she was and said he was about to get on national television and made a big commotion and got handcuffed. Well, she was right because that story is all over the news. Only instead of being mad at the police officer, all of America is laughing at how ridiculous and entitled Ms. Witherspoon sounded. I'm a little sad, because I liked her and thought she was smart, but she acted just like any other Hollywood brat. So thank you, Ms. Witherspoon, for reminding me how smart it is to never, ever drink and drive and even smarter not to ride in a car with a drunk driver and to never yell at a police officer. Elle Woods would be ashamed of you. No snaps for you.
Posted by Jen at 10:02 PM